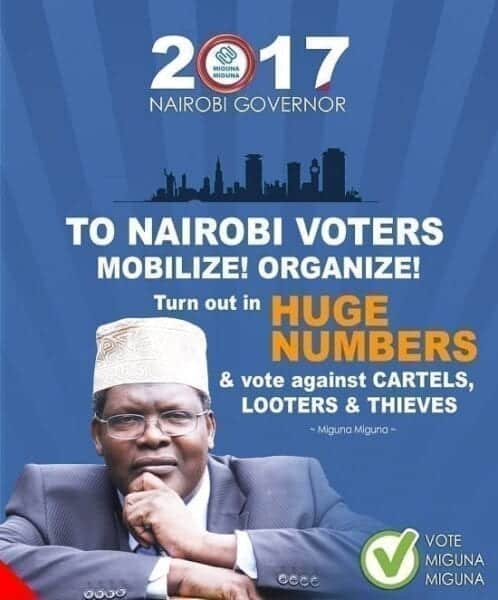 ‘Many people are saying’ Miguna Miguna does not stand a chance to be Nairobi Governor.

The controversial author has declared his interest, and all indications are that he will be contesting as an independent candidate.

Miguna has an impeccable track record of not stealing public money. He was a senior adviser to Prime Minister Raila Odinga, and when everyone around the PM was been accused of corruption, his name never came up. The fact that he still works in Canada to pay his bills perhaps further proves he never stole.

But is that enough to make him governor? Absolutely not.

Kenya’s politics is maybe two decades away from being about issues. Until the middle class becomes the majority, every election will be determined by tribe.

It may happen sooner for gubernatorial races, but unlikely for the presidential.

If morals and track record have anything to do with our voting, Miguna Miguna would be leading in the polls right now. But what we see is Kidero and Sonko being the top two candidates.

Miguna may have worked for Raila Odinga, but he sure did not learn anything on how to conduct campaigns in Kenya. Since he declared his interest, he has done nothing to show that he understands the ‘Kenyan way’. We’ve not seen him eating lunch in dingy places, he has not conducted a single rally, he has not donated to any fire victims.. etc.

What he has been doing is basically designing fancy posters and posting them on Twitter and Facebook.

On the other hand, Sonko is on the ground endearing himself to the people.

Someone put that into perspective.

When Sonko for instance was vying for Senator, he was in the news every other day because of something he said or did.

Miguna has this mistaken assumption that his 20,000 Twitter followers (Peter Kenneth had 300,000) will come out in droves to elect him. I’ve got news for you. I follow you on Twitter but vote in Kiambu, and I believe many of your followers have similar folktales.

Even with a blog like this one that basically creates news stories out of politicians’ Twitter accounts, we have failed consistently to find anything from Miguna’s timeline. The guy is as boring as a rock. He may entertain us when he appears on Jeff Koinange Live once in a while, but online he is just plain.

I’ve scrolled down his Twitter timeline and every single tweet stretching months is about his candidature. He tells us day and night how Sonko is a drug lord, how Kidero has failed and how he will kick out the cartels. That is very good… and monotonous.

‘Miguna blames Matiang’i for School Fires’, ‘Miguna demands Wario’s resignation after Yego passport fiasco’,  ‘Miguna attacks Kenya Power after nationwide blackout’, ’10 things you did not know about Miguna, number 6 will shock you’, wrote no blog ever.

Trump did not get to be the Republican candidate by tweeting about Obama and Clinton 24/7.

If you cannot make blog headlines, how do you expect to make MSM headlines?

Away from his dull social media presence, Miguna has reminded us very often, especially on JKL, that Raila will never be President.

I think its time he looks at the same script he reads from, and evaluate his position. No one disagrees he may be the best candidate (My grandmother would run the city better than Kidero), but I think Wenger has better odds to win the Premier League this season.

He has no party, he has not money, he has no tribe. It’s sad but it’s the reality of our politics. I would say he was born thirty years early.

Like every politician, Miguna dismisses scientific polls that place him a distant last, and instead points to online polls where he is always leading.

I believe he is a very intelligent man, so I’ll assume it’s a political move not that he actually privately believes the online polls.