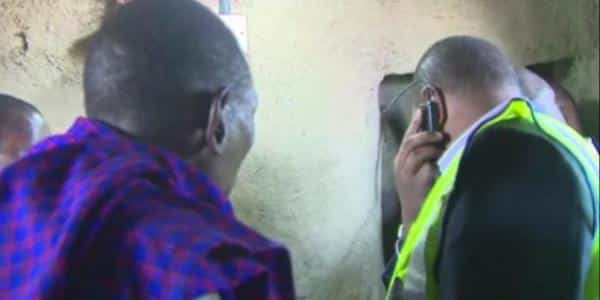 A video has emerged capturing President Uhuru Kenyatta using a mulika mwizi phone during his visit to Narok County where he was unveiling an electricity project.

Mr Kenyatta was spotted using the analogue mobile phone at the home of one of the villagers as he launched the Narok Last Mile Electricity Project in the area.

The Head of State took time to test the phone of the elderly man that had just been charged with the newly installed power.

In the clip, Kenyatta asks the mzee if he could allow him to use the gadget then goes ahead to make a call with the phone. It’s not clear who the President chose to call during the event.

It was a unique sight to see the President use the rather cheap phone as one of the people accompanying Kenyatta is heard reminding him it did not have data (referring to internet connectivity).

Mr Kenyatta and his deputy William Ruto have been making trips around the country launching various electricity projects in rural homes.