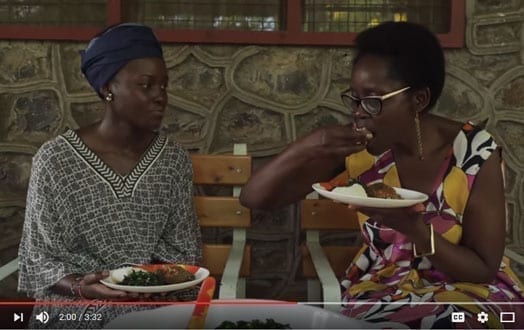 When Oscar Award winning actress Lupita Nyong’o revealed her inability to cook ugali during a TV interview in Kenya last year, she may not have expected the kind of reaction that she got from Kenyans on Twitter who went ham on her for her ‘ignorance’.

Well, Lupita has now revealed that she has since learnt how to ‘spin’ Kenya’s staple food.

In a new interview published by Vogue, it took the revelation in June 2015, for Lupita’s mum to ‘summon’ the global silver screen icon for a lesson on how to cook ugali.

“I’d never been happy with the fact that I couldn’t cook ugali, When I admitted that I didn’t know how to make ugali on national television, the reaction shamed me even more than I was already ashamed,” she says during the interview that was shot as she learnt to make ugali.

The video from the interview posted online by Vogue shows Mrs Dorothy Nyong’o giving Lupita step-by-step instructions on how to make ugali at the family home in Kenya.

“Pour it in not so fast, not so slow,” her mother tells her as she carefully adds water.

“This is like an abdominal workout; this is no joke,” the Oscar award winning actress exclaims while stirring the pot.

Lupita manages to cook a small portion of ugali and judging from the reaction off her mother and father, Prof Anyang Nyong’o, her first ugali lesson is a big success.

At the end of the video Lupita unpeels the crust from the bottom of the sufuria. “This is the stuff over with your siblings,” she says before taking a bite.