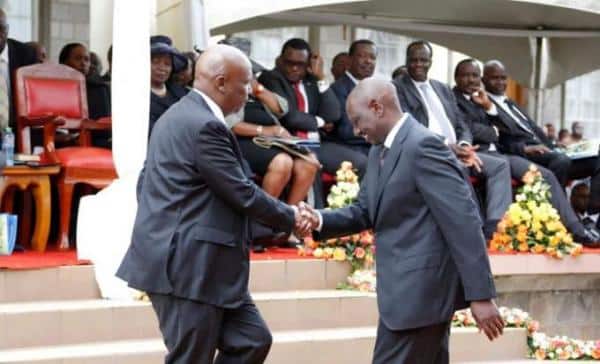 Those who attended the closed door meeting at his Sugoi home in Uasin Gishu County told the Nation that the DP was unimpressed with Kanu’s resurgence in the region as the 2017 elections approach.

Mr Ruto is said to have asked the leaders “to go out of their way” and popularise the Jubilee Party in the region considered a Kanu stronghold.

“The DP was particularly unimpressed by Kanu’s heightened activities in the region. He urged leaders to ensure that Jubilee wins all the seats in the 2017 General Election,” said the source who sought anonymity.

Both Kanu and Jubilee have been locked in a supremacy battle to control the vote rich North Rift region ahead of next year’s General Election.

Kanu, led by Baringo Senator Gideon Moi, has slowly been re-inventing itself as the alternative party in the region, waiting to take advantage of any dissent or fallout following dissolution of affiliate parties to form Jubilee.

Yesterday, the DP argued that the Jubilee government had done a lot for the county including improving infrastructure as well as provision of water and urged residents not to be swayed by the Kanu euphoria.

“He also assured us that the party’s primaries will be transparent, free and fair and that he and President Kenyatta had no preferred candidates,” said an aspirant who attended the meeting.

The Deputy President, at the same time, said he would tour Kerio Valley in the next two weeks to assess the security situation and ensure normalcy returns to the area.

He said the government was working round the clock to ensure insecurity caused by cattle rustling is dealt with once and for all.

The MPs, who attended the meeting, said residents of Baringo were firmly behind the leadership of Jubilee because of its initiatives in the county such as water dams, construction of roads, electricity to schools and homesteads and improvement of hospitals among other projects.

“We are grateful that in barely four years in power, Jubilee has managed to initiate many development projects for the people of Baringo compared to the 50 year rule by the previous government including Kanu,” said Tiaty MP Asman Kamama.

Baringo North MP William Cheptumo said the Kalenjin would continue to support the leadership of the DP for the sake of peace and development.

Uasin Gishu Governor Jackson Mandago urged Rift Valley leaders to work together in ensuring the re-election of Jubilee in 2017.

Baringo Governor Benjamin Cheboi and Mr Kamama said leaders along the Kerio Valley would work with the government to ensure peace is attained in the region.

IEBC: 2017 Elections will be manual

Matiang’i denies Miguna was deported, tears into the judiciary

Mike Sonko was not blocked to enter State House