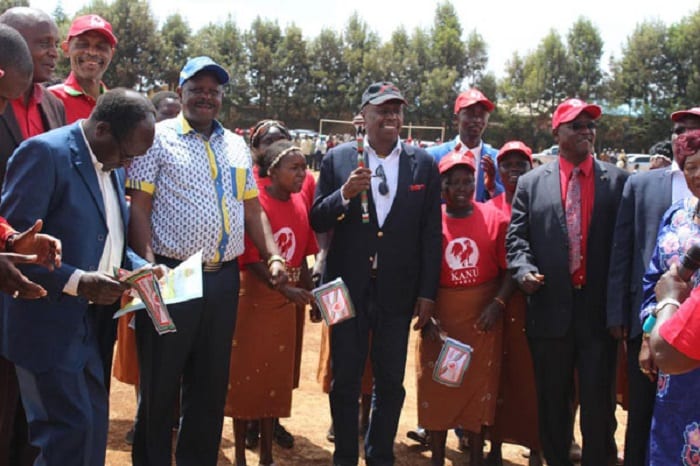 Leaders in the South Rift on Sunday came to the defence of Deputy President William Ruto and accused Kanu chairman Gideon Moi of disrespecting him.

Mr Moi, on the other hand escalated his war against the Deputy President, dismissing his 2022 presidential hopes as wishful thinking.

Kericho Senator Aaron Cheruiyot said Mr Moi was not sincere in his decision to support President Kenyatta’s re-election and warned him against belittling the Deputy President.

He said although Jubilee welcomed efforts geared towards boosting President Kenyatta’s re-election campaign, the Kalenjin community would continue to support Mr Ruto as the second in command in the ruling coalition.

“We invite everyone to Jubilee but when you go into someone’s house you do not try to take charge and reorganise things. Kanu has claimed that it supports President Kenyatta but not the DP and that is very fishy. If someone tells you he loves your father but hates your mother, be wary of such a person because he is not your friend,” he said in Kericho during a political rally attended by the Deputy President.

In Elgeyo-Marakwet, however, Mr Moi asked President Kenyatta to directly engage the Rift Valley region without banking on Mr Ruto to deliver votes during the August elections.

The Baringo senator told President Kenyatta that there was no one who could act on behalf of a community to consolidate votes for auction.

“I even told the President during the burial of Mark Too that he should come to engage the people of Rift Valley directly and ask for their votes,” he said, adding that the present-day electorate was more discerning and aware of its rights.

“There is a moving spirit of change that is affecting people across the country. This wind that started blowing through the Rift Valley is a wind of change,” he said.

In remarks perceived to be directed towards Mr Ruto, who has indicated that he will vie for the presidency in 2022, Mr Moi said such talk was unnecessary since matters of the future depended on the will of God.

“Don’t come here telling us about 2022 when our people are battling insecurity and hunger among other pertinent challenges. Tell us about what’s in store for us today, the same way our daily prayer in the Bible says, ‘give us our daily bread today’,” said Mr Moi.

He went on: “We are demanding peace today, employment for our jobless youths and infrastructure today. I also want to remind those talking about 2022 about the Kiswahili saying “Kutangulia sio kufika. (Being ahead does not make you a winner).”

In Kericho, Energy Cabinet Secretary Charles Keter said Jubilee was the party to beat in the South Rift, adding that no other parties could match its strength in the region.

“I am telling you (DP Ruto) that the people of Kericho and the South Rift region are behind you and the President one hundred per cent. Anyone looking for a reason to support Jubilee should be thankful for the peace that the government has brought to this country,” said Mr Keter.

When the Deputy President rose to speak however, he steered clear of his rivalry with Mr Moi, only saying he was confident that Jubilee would win this year’s election by a landslide and dismissing the opposition as playing catch-up to the ruling party.

“We are going to the election armed with our scorecard and our performance record, which we are very proud of and we are going to face the electorate knowing very well that our score card speaks for itself and we have delivered on most of our pledges,” said Mr Ruto.

He said the Jubilee government was unrelenting in its quest to ensure that this year’s election will not only be free and fair, but also peaceful, adding that security agencies would not hesitate to punish any politician found engaging in hate speech.

“We have a duty individually and collectively to ensure that the next election will be free, fair and peaceful. The government will ensure that this happens by all means necessary. All aspirants must make this their business as well because we do not want war,” he added.

Kericho Governor Paul Chepkwony said Jubilee had brought development to the country across all sectors and called on Kenyans to give President Kenyatta and Mr Ruto a second term.

Prof Chepkwony, who is running for a second term in office, called on Mr Ruto and the Jubilee Party leadership to do whatever is necessary to ensure that the party nominations slated for next month will be free, fair and transparent.

“My support for you is unwavering. And as you journey to the presidency in 2022, I will stand solidly behind you. You gave us an assurance that during the nominations there will be no favoured candidate and this is very important,” he said.