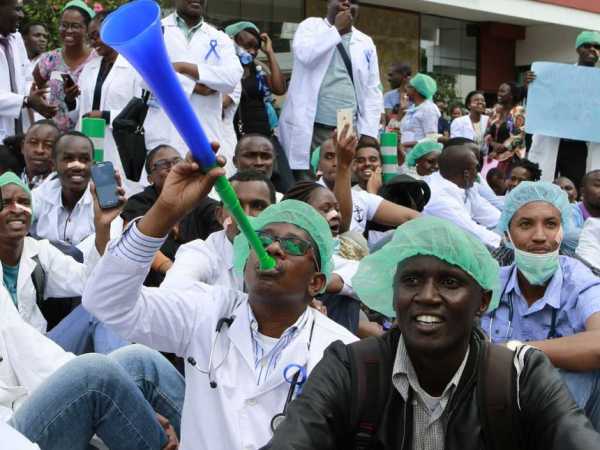 The striking doctors have been left bruised and painfully wounded. They overplayed their hand and their vitrioric brickmanship and bravado have been tamed and the greedy lot castrated on the hip. The doctors did not come across as honest and sincere but more as fighters determined to humiliate the government in an election year. They sadly allowed their crusade to be hijacked by NASA and that further undermined their case and credibility. Their demands were unrealistically greedy and truth be said the government came across as the reasonable party. Mudavadi and NASA’s promise to pay them exactly what they asked showed reckless opportunism and fiscal irresponsibility on their part. The NASA brigade understand only spending not production.

In the end most Kenyan doctors we must admit are shameless and parasitic employees determined to hung on to secure and pensionable government jobs while making more of their money from private practice. This is absolutely dishonest. The government needs to require and enforce that doctors on their payroll are available atleast for 4 normal working days and for day or night hours to eliminate this obvious conflict of interests. Few other professions have the notoriety of these greedy racoons. They needed to be stopped and fast. Indeed it may well be argued the striking doctors are liable for manslaughter for the deaths that have occured due to their abdication of that sacrilegious duty of care that a doctor owes the patient.

Finally those doctors who feel that what Kenya offers isn’t good enough can look for work in the UK, the US and Australia etc where they will realise quickly that the seemingly high pay available there has to be honestly earned through hard work and with limited opportunity for the money making private clinics they are accustomed to. At that point they shall remember the Egypt they have so foolishly desecrated for the last 100 days.

Wait Until I Die to Fight for My Wealth, Jackson Kibor tells Sons