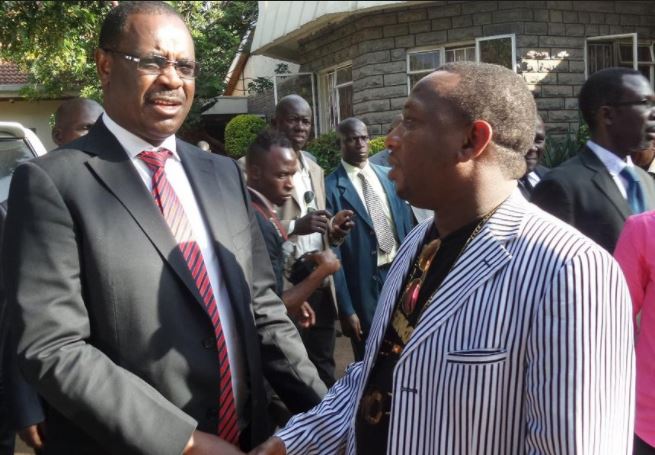 Nairobi County Governor Dr Evans Kidero has described senator Mike Sonko as a comedian who can’t be entrusted with running the capital city.

Speaking on Monday, the governor said that the Nairobi senator is unsuitable for the position of governor.

He took a swipe at Sonko’s plans for the city, saying they are ill-informed and untenable.

“We cannot accept Nairobi to be controlled by a comedian. We need a credible leader who will be able to address issues facing city residents and not one who is making knee-jerk pronouncements that are not tenable in practice,” said Dr Kidero.

Kidero was speaking at City Hall as his reelection bid received a boost after he got the backing of over 500 Muslim traders from Kamkunji constituency.

He assured traders that he will increase the number of modern kiosks in the city if he re-elected and promised the traders operating at bus station, Wakulima and Muthurwa markets that his administration would rein on county askaris who harass them.

“I have heard and I will ensure as your governor all business people have a conducive environment to do business. We will have more modern kiosks. The issue of licenses will also be addressed,” said Dr Kidero.

Sifuna claimed Sonko’s governorship would be bad for Nairobi businesses.

“If we allow Sonko to take over, hawkers will flood the city which will be bad for business,” said Sifuna

Sonko, Kidero will be battling it out for Nairobi Governor with ‘spoiler’ Peter Kenneth who will vie as an independent candidate.

Yesterday we conducted a poll to find out whose votes Peter Kenneth will split between Kidero and Sonko.

VIDEO:Drama as Man claiming to be Ntimama’s son attends his funeral

See How Beautiful Mwende Was Before Husband Chopped Off her Hands