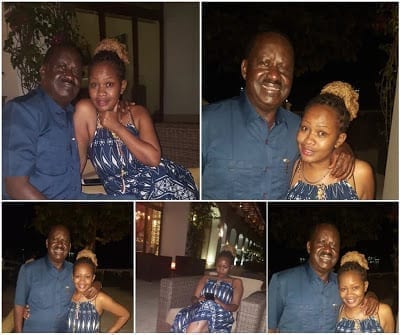 Sasha Seraphine Mbote has become famous in Kenya after she posted photos of herself with National Super Alliance (NASA) Raila Odinga on her Facebook page while in Zanzibar. The photo has so far generated a lot of attention and all sorts of comments with others asking her to pull down the pictures.

However, the lady has responded to all the people who negatively commented on her photos. She said that by doing so, Kenyans have made her famous and made her land a huge deal.

“Kenyans can #Make you or #Break you, I posted images of me and Honorable Raila Odinga just like I usually do, Coz in my line of duty I meet a lot of People, Kenyans have taken those pictures saying all sorts of things calling me names, I wanna say thank you so much my fellow countrymen you’ve shown the world what your made of, You just landed me a huge deal, I’m on my way to Arusha to sign the contract. www.maridaditours.co.tz Market me Kabisa my business needs it. Castigate me kabisa you are advertising my business for free Danke Schon,” she posted on her Facebook page.

Sasha also went ahead and thanked Kenya for the negative publicity since her tour company is now blowing up with bookings.

“Thank you Kenya for the negative publicity, My tour company is blown up with bookings, Asanteni Sana make me Trend kabisa it’s good energy for business,” she continued.

The lady who is the Chief Executive Officer of ‘Sasha Spice Zanzibar Spa’ (from her profile), says she met Raila on her line of duty and ‘celebrated Zimbabwe’ with him.

Raila Odinga is reported to have left the country for Zanzibar on Sunday evening hours before the Supreme Court gave its final verdict on the two petitions filed challenging the October 26 repeat presidential election on Monday 20 November.

“The unrest pushed Odinga out of the country. He left Kenya and is now in Zanzibar, off the coast of mainland Tanzania,” said Mr Lone.

VIDEO:Kenyan family appeals for funds to get son accused of rape out of US jail

Power Women of the Diaspora: A Leader’s Journey from Chemist to Business Advocate

DEVOTION:This Is An Eternal Perspective