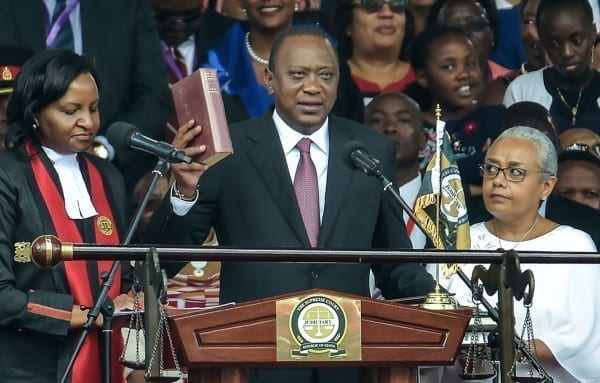 The inauguration was attended by nine heads of state including Yoweri Museveni (Uganda), Seretse Ian Khama (Botswana) and thousands of Kenyans.

Uhuru and Ruto took for their final term in office in a ceremony administered by Chief Registrar of the Judiciary Anne Amadi in the presence of Chief Justice David Maraga, in line with constitutional requirements.President Uhuru faces the challenge of uniting Kenyans and jump-starting the economy following a divisive electoral processes that saw his main challenger and National Super Alliance (NASA) leader Raila Odinga, withdraw from the repeat presidential election of October 26.Uhuru was declared the winner by the electoral commission with 98 per cent of the votes cast and the Supreme Court upheld his election after dismissing two election petitions challenging his win.The President has since reached out to NASA which has vowed not to recognise the Jubilee government, with a call to abandon street protests and join hands with his administration to steer the country out of the divisive contest.

NASA announced that they would hold a memorial service at Jacaranda grounds in Nairobi on Tuesday for 27 supporters killed during election protests; instead of a parallel swearing in ceremony for the coalition leader Raila.

Three NASA principals, Raila Odinga, Musalia Mudavadi and Moses Wetang’ula resolved that there was no legal basis to run a parallel swearing-in.

“We are not swearing-in Raila. No such thing will take place. If you listened to Raila very carefully, it is clear he himself cannot do such a thing,” said Bungoma Senator Wetang’ula.

Raila is said to have further explained it was a risk he would not want to take, given his record in the fight for democracy and international image.

On Tuesday morning, youth engaged police in running battles after police sealed off Jacaranda grounds with water cannons trucks and armored personnel carriers, denying them access to the venue. Police lobbed teargas in bid to disperse the crowd.

Odinga supporters say they will not forgive the ruling party, accusing it of stealing the election, rampant corruption, directing abuse by the security forces and neglecting vast swathes of the country, including Odinga’s heartland in the west.