“We Had a Good Laugh,” Jubilee Laughs Off NASA Swearing-In Ceremony

The ruling political party Jubilee Party of Kenya has played down the ‘swearing-in’ of NASA leader Raila Odinga yesterday.

After months of anticipation, the former Prime Minister was ‘sworn in’ as the ‘people’s president’ in a largely disappointing ceremony at Uhuru Park. Three Nasa co-principals, Kalonzo Musyoka, Musalia Mudavadi, and Moses Wetangula, inexplicably skipped the event citing “circumstances beyond our comprehension and control.”

Their conspicuous absence came as a big surprise and raised eyebrows among Nasa supporters, who demanded an explanation from Odinga during the “oath-taking” ceremony.

“Kalonzo Musyoka is not here with us. But he is together with us in this. He will be sworn in later. You will hear more from us,” Odinga explained.

The event also suffered a huge setback after the Communication Authority of Kenya shut down television and radio transmission of all media houses.

As all these went on, Uhuruto’s camp was definitely following the proceedings keenly and described the event as “entertaining.”

“Well, that was entertaining, we had a good laugh…….. now back to building the Nation on the Big Four pillars,” posted Jubilee on Twitter. Well, that was entertaining, we had a good laugh…….. now back to building the Nation on the Big Four pillars.#KenyaMbele

It really was. Can you imagine leaving the country to be ran by that team. God trully loves Kenya. But Uhuruto can now lead the country transparently. 2022 isnt that far and we need to see results. No more talk. HE Ruto you have a lot at stake.

Rao should try a stand up comedy.

Nonsense, why did you switch off the TV and radio stations…. Fools 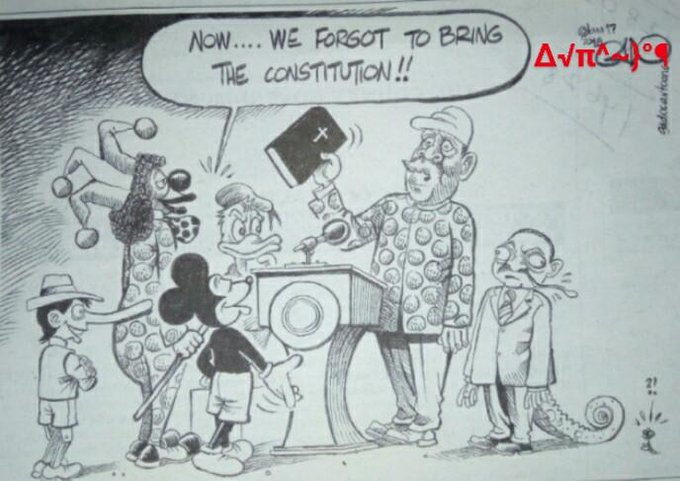 Kalonzo is just a perfect example of “Naenda ivi nakam” ..

KENYAN MAN HAS PASSED AWAY IN BIRMINGHAM, UK

Biggest Most Anticipated London Rugby Sevens After Party In London

VIDEO: UHURU BECOMES EMOTIONAL AS HE CONFESS HIS SINS IN CHURCH