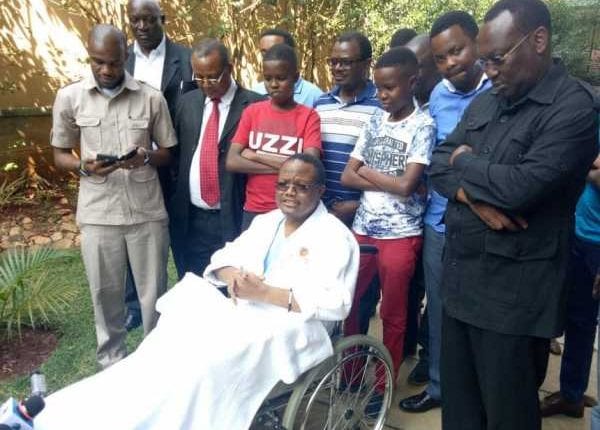 Lissu, 49, was shot by unknown gunmen in Dar es Salaam in September and was admitted at Nairobi Hospital.

“Since Magufuli came into power, I have been the greatest critic and that is why I was attacked,” he said on Friday.

The Chadema politician and Member of Parliament for Singida East addressed a press conference in Nairobi on Friday.

“I am not a businessman and I don’t fight in bars but since 2010 and even before that, I have been a critic of the Tanzanian government.”

Lissu, who spoke in a wheelchair, said that since the attack, Magufuli has not issued a statement to that effect and that his silence means a lot.

“Magufuli hajatoa taarifa yoyote hadharani. Serikali yake haijatoa taarifa rasmi juu ya shambulizi hili,(Magufuli has not issued any public statement. His administration has not spoken about the attack),” he said.

But after the attack, Magufuli’s ruling Chama Cha Mapinduzi party condemned “the cruel and inhumane act”.

The President tweeted that he was “shocked to hear of the attack on Tundu Lissu and I pray to God almighty that he will soon recover”.

Police said investigations into the attack were ongoing; they said they did not know what motivated it and that suspects were still at large.

Lissu narrated how the attackers trailed him from Parliament buildings to his home in Dodoma with the aim of killing him.

“A group of people took weapons used for war and followed me all the way from Parliament during the day with the aim of killing me,” he said.

The Sigadari MP said 16 of the bullets hit him, that most of them tore through his body and that he was left half dead.

Lissu said one bullet is still lodged in his body as doctors told him it would be more risky to remove it.

He faulted police saying they were not around his house to protect him on the day of the attack, hence his suspicion of foul play.

Lissu said since he was hospitalised, the Tanzanian government has not given any funds for his medication.

“I am still an MP. There are rules on medical bills. Parliament should pay for expenses whether one is within Tanzania or not. Today, Parliament has not given a shilling for my medical expenses,” he said. “We wrote a letter to them but they have been going round and round. The speaker has not even come to see me. It is sad.”

He accused the government of not having a plan B after the one to kill him failed.

“Waliopanga haya hawakuwa na plan B. Kama kulikuwa na plan B…hiyo plan B iko wapi…for four months?. This assassination has failed. Mungu wangu alikuwa macho kweli kweli (Those who planned this failed attack did not have a plan B…My God was truly watching over me),” he said.

Lissu claimed that since Magufuli became President, he has been arrested eight times.

“We have upgraded from arrests to assassinations. It’s time for the international community to rise up,” he said.

(No one has come to investigate what happened. Police have not come here…The attack was planned so that I stop troubling the who-is-who in Tanzania)

“This is the time to denounce this government. [It should be denounced] whenever the opportunity arises.”

Lissu serves as chief whip for the parliamentary opposition and is president of Tanzania’s bar association, the Tanganyika Law Society. He is also CHADEMA’s attorney general.

As a vocal opponent of Magufuli, he has been arrested on several occasions and charged with incitement. He was detained in July after terming Magufuli a dictator but was released later.