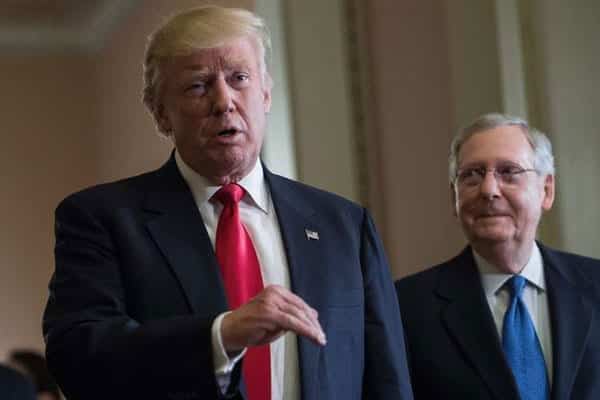 President Donald Trump was set yesterday to play the role of America’s salesman-in-chief in a speech promoting the rebounding US economy in front of the global elite in Davos, but found himself unable to escape the shadow of scandal at home and abroad.

“America is open for business again, in the sense that there’s been no better time to build, to invest, to hire in the United States,” a senior US administration official told reporters in a briefing before the speech at the World Economic Forum in the Swiss Alps.

At the same time, Trump was expected to warn US trading partners that they must play fair or risk reprisals, at the end of a week that saw his administration target China and South Korea with new tariffs and by turmoil in currency markets caused by his Treasury secretary apparently tolerating a weaker dollar.

Trump has reconciled the Davos-bashing that characterised his unorthodox march to the White House with the need to sell America to the world, and the speech gives him the opportunity to try to shift the dial away from the latest eruption of unfavourable headlines back home.

The president awoke to a bombshell New York Times story that he had ordered the firing of Russia investigation special prosecutor Robert Mueller last year, but had to back off when the White House counsel threatened to resign.

The president did use a British television interview recorded in Davos to strike a rare note of contrition on another controversy.

After last year retweeting a British far-right group’s videos apparently showing Islamist violence, Trump said in the interview broadcast Friday: “If you’re telling me they’re horrible racist people, I would certainly apologise if you’d like me to do that.”

The charge that Trump is racist earned new traction this month with his reported slur against “shithole” countries in Africa.

Before his speech in Davos, he held talks with Rwandan President Paul Kagame, who currently chairs the African Union.

Trump asked Kagame to pass on his “warmest regards” to other regional leaders at an AU summit this weekend. But some African business leaders say they are planning to boycott Trump’s closing speech in Davos.

Oxfam executive director Winnie Byanyima noted that some Africans are talking even of walking out of the hall. “I will not attend the speech. I am busy,” the Ugandan said.

Gone Too Soon: Passing On of Boniface Nyangau Of  Dallas, Texas