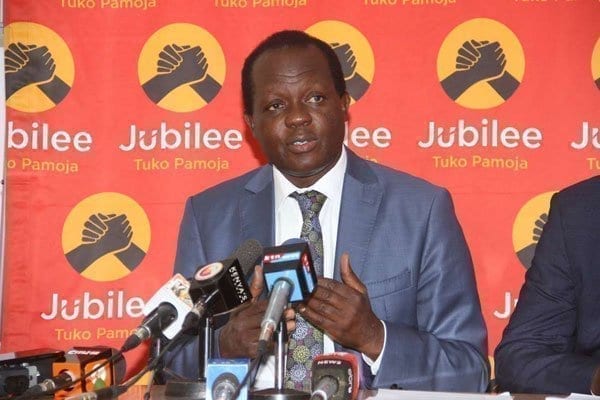 The judiciary and the media are an extension of the opposition, Raphael Tuju has said in an explanation of Kenya’s complexities.

Tuju told BBC’s HARDtalk that the judiciary makes decisions based on ethnic inclinations while the media is used to propel propaganda that advances the agenda of the opposition.

“We have a judiciary which is a reflection of the society but judges make decisions based on ethnic loyalties as opposed to the law,” the Jubilee Party secretary general said on Thursday.

“So when you have a media that is an extension of the opposition propaganda, and judges who have more loyalties to their tribes than the law, we have more complex matters to deal with compared to what you have to deal with in London.”

Tuju said this while justifying the government’s resolve to shut down several TV stations to prevent live coverage of Nasa leader Raila Odinga’s defiant swearing-in as the people’s president.

Citizen, Inooro, KTN and NTV, as well as some radio stations of Royal Media Services, were taken off air shortly before the ceremony at Uhuru Park in Nairobi on January 30.

There was backlash from the public, human rights organisations and local and international authorities including US president Donald Trump and the European Union.

Interior CS Fred Matiang’i claimed the National Super Alliance had planned a massacre during the inauguration and that the stations would remain shut during investigations.

Asked why they did not file a case against the media and Nasa, Tuju said there is much deeper and solid evidence that the media was to be used to propel the opposition’s propaganda.

He said the plans were made against president Uhuru Kenyatta’s regime.

“We have evidence … it is much deeper than that,” he said.

The official, who was appointed to Uhuru’s cabinet, further said it is a “miracle” that Kenya has not plunged into serious civil war in more than 50 years of independence.

“We are not a nation state. Kenya has 42 different nationalities. We are trying to forge a country out of a geographical phenomenon. It is a country that has a high potential of breaking into civil strike and war,” he said.

“In fact, it is just a miracle that 50 years down the line, we haven’t experienced major breakdown of law and order.”

He added that the country has four races that make Kenya “very, very unique”.

Several Nasa politicians have been arrested and released since the swearing-in of the veteran opposition leader. They include Ruaraka MP TJ Kajwang, Makadara’s George Aladwa and lawyer Miguna Miguna.

DCI boss George Kinoti and IG Jospeh Boinnet defied court orders for Miguna to be freed on bail. He was deported to Canada on Tuesday night but says he will be back and that he will take legal action against those who circulated copies of his passports.

Diaspora to file lawsuit against Government of Kenya over Voting Rights

Kenyan woman among winners of 2015 Index on Censorship in London

Chief witness ‘a pathological liar who tricked woman into marriage’

GOOD NEWS FOR YOUR WEEK