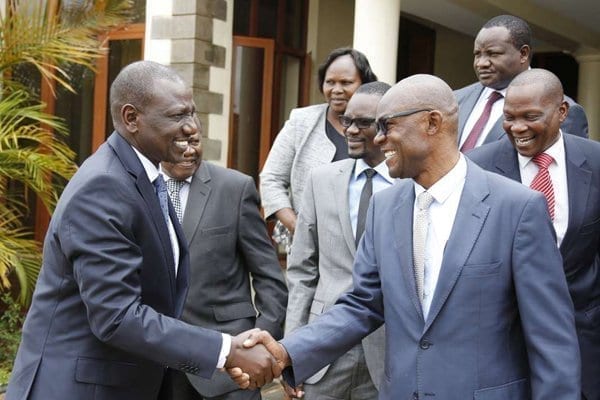 Two Amani National Congress members from Kakamega and Vihiga Counties have dismissed the meeting held on Thursday between Deputy President William Ruto and leaders from Western.

Kakamega Senator Cleophas Malala and ANC nominated MP Godfrey Osotsi said the meeting was based on individual gain and not development of the region.

Mr Malala said many leaders from the region were not invited to the meeting.

“If this meeting was meant for development, it would have involved all leaders from the region. But in a case where a particular group of leaders is invited, then it depicts a hidden agenda,” said Mr Malala.

He said leaders were capitalising on the dwindling performance of industries in the region to woo residents to support them for political gain without solving the problems in the region.

“Mumias Sugar Company has been used over time by leaders who intend to ascend to leadership positions.

“Why can’t the government come up with solutions to end problems facing the miller once and for all?” questioned Mr Malala.

The two leaders argued that development is provided for under the Fiscal Strategy Paper and the National Budget and elected leaders do not have to beg for support from the Executive.

Mr Osotsi said he was invited to the meeting but skipped it as he was attending lawyer Miguna Miguna’s court proceedings.

He said the argument that it was a development meeting was weak.

“We cannot support the meeting that is focusing to spearhead the political destiny of an individual,” said Mr Osotsi.

He said MPs who attended the meeting to discuss development projects in their constituencies do not understand their roles as lawmakers.

“In the country’s Constitution, MPs make budgets based on development projects in their regions.

“We have just passed the budget recently determining what the government is going to do in terms of development. Why again should they hold a meeting with the Deputy President to beg for development?” he said.

Mr Osotsi argued that people are taking advantage of the handshake between President Uhuru Kenyatta and ODM leader Raila Odinga.

“The handshake had an important agenda but some leaders are taking advantage and organising parallel handshakes,” he said.

MPs said it was meant to discuss development projects in Western such as the upgrade of roads, education, administration, water, health, revival of industries and expansion of airstrips.

Mr Naicca said they supported the meeting and pledged their support for development initiatives planned by the National Government in their constituencies.

“From the meeting, a 27km stretch of Mumias-Musanda-Sindidi road and another 17km Mumias-Indangalasia road will be planned for upgrading by the National Government.

“The Mumias West Technical Training Institute will be officially opened in May this year,” he added.