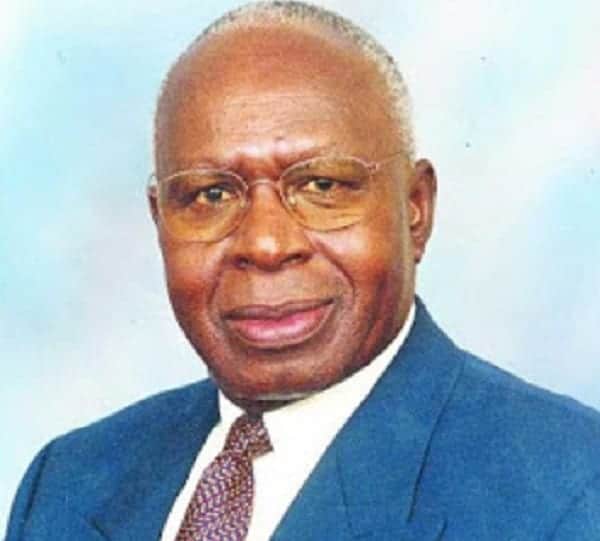 Sources said the octogenarian politician had been checked into the hospital after he tripped and fell at home.

While at the facility, he complained of severe chest pains and was immediately taken to the ICU for closer monitoring.

His eldest son, Charles Ayako Nyachaei, a judge at the East African Court of Justice, confirmed that his father was diagnosed with a chest infection.

The former chairman of the defunct Constitution Implementation Commission was, however, guarded on the details of the illness, citing family confidentiality.

“What I can tell you is that he complained of chest pains and was put in ICU,” he told the Star.

When pressed further, Ayako said his father was still under medical observation and that doctors were carrying out further tests to establish the cause of the infection.

“It is doctors who decided that he gets more tests, otherwise Mzee is out of danger,” he said.

A chest infection is usually an infection of the lungs or airways, which can lead to difficulties in breathing.

The main types of chest infection are bronchitis and pneumonia. Most bronchitis cases are caused by viruses, whereas most pneumonia cases are due to bacteria.

Although the former CIC boss was categorical that the former minister had been moved from the ICU, the Star established that the elderly politician was still under round-the-clock monitoring by doctors.

“He could be discharged even tomorrow because he has now been moved to the room [ward],” Ayako insisted.

But highly placed sources within the hospital confirmed that the 86-year-old former head of the Public Service was still in ICU.

“He is still under observation at the ICU,” said the source in confidence.

On Friday, he was discharged from ICU and wheeled to the North Wing which is reserved for VIPs. But on Sunday his situation deteriorated, forcing doctors to take him back to the ICU.

Yesterday the Nairobi Hospital declined to give any information regarding Nyachae’s condition, citing doctor-patient confidentiality. He has been battling an undisclosed illness since he retired from active politics in 2008.

In November 2015, Nyachae’s family was forced to refute social media reports that the former minister had passed on.

At the time, Ayako wrote on his Facebook account, “Some person or persons created a fake Twitter account @charles_nyachae and earlier this evening twitted that my father had died. This is not true. I spoke to my father about an hour ago and he is very well, for which we thank God. I cannot even begin to imagine what level of hatred would warrant such a move.”

When he retired in 1982, the position was diluted to Head of Civil Service and Secretary to the Cabinet.

Moi had barred Nyachae from joining active politics until 1992 when he was elected the Nyaribari Chache MP and subsequently appointed to the Cabinet.

He served in the ministries of Agriculture and Finance and quit when Moi moved him to the less glamorous Environment ministry.

The son of a paramount chief, Nyachae contested for the Presidency on a Ford People ticket in 2002 and a came a distant third with slightly more than 700,000 votes, behind Uhuru Kenyatta and the victor, Mwai Kibaki.

Nyachae studied at the Kisii Government African School but dropped out in 1949 to take up employment with his father — a paramount chief — as a district clerk. He later travelled to London in 1957 to study Public Administration and returned to join the colonial government as a revenue clerk.

In 1964, immediately after independence, he was appointed a District Commissioner before climbing up to a powerful Provincial Commissioner under the Jomo Kenyatta reign for 14 years.

After Kenyatta died in 1978, Nyachae was retained by his successor, President Daniel Moi, who elevated him to Chief Secretary.

After he retired from the Civil Service, Nyachae concentrated on his multi-billion businesses, that include huge tracts of land across the country. His business empire includes interests in agriculture, banking, real estate, transportation and manufacturing.

In 1998, Nyachae landed in the powerful Finance portfolio where he had a short stint. After he publicly admitted that the government was broke because of rampant corruption, Moi transferred him to Environment, which he considered a ‘demotion’. He resigned.

After falling out with Moi, he quit the Kenya African National Union (Kanu) altogether to join the opposition FORD People.

He again fell out with his colleagues in the opposition in 2002 after Raila Odinga proclaimed Kibaki Tosha at Uhuru Park shattering his hopes of being the joint candidate to face Kanu’s candidate, Uhuru Kenyatta.

Nyachae had proposed that the opposition candidate be chosen through secret ballot by delegates.

He, however, went ahead to mount his first and last unsuccessful stab at the presidency, coming out with 14 MPs in a poll which Kibaki resoundingly won, ending 24 years of Moi’s rule.

Courtesy of his party’s strength, Nyachae was again appointed to the Cabinet by Kibaki in 2004, serving as Energy minister before being moved to Roads and Public works in 2006.

He served as the elected Nyaribari Chache MP uninterrupted from 1992 to 2007 before he retired. He has since remained the most influential politician in Kisii. His political heir, Ayako, contested for Senator for Kisii in the last election on Jubilee ticket but lost.

Nyachae has a large family of five wives and 20 children. His first wife, Esther, died in August 2016.

The 2013 All DC Metro Revival Conference in Silver Spring Maryland

A documentary of a Kenyan diplomat in Ireland

The opposite of weddings – Top ten reasons for divorce in Kenya