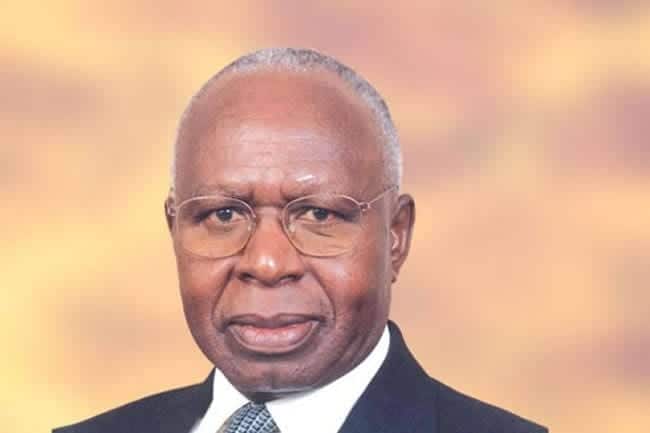 Social media is awash with news  that Former powerful cabinet minister Simeon Nyachae is dead. The news has been circulating today all day which has confused many.

According to few posting from reliable personalities,  Simeon Nyachae  is not dead but hospitalized at Nairobi Hospital. Here below are the posts:

Simeon Nyachae is hospitalized at Nairobi Hospital. Hon Silvanus Osoro, the MP for South Mugirango, says that he is with Mzee Nyachae at the hospital. He affirms that Mzee Nyachae is alive and he asks the public to disregard rumors that Mzee is dead.

Ignore The Fake News and its Authors.
Orina Ontiri

Kindly ignore the romour Hon. Simeon Nyachae though sick, is alive and recuperating in NRB. Just spoke to close sources wish him QR. Social media can really do harm when somethings are not confirmed

Simeon Nyachae  is a Kenyan politician and former government minister from Kisii County. He is also a successful businessman and entrepreneur with profitable investments inside and outside of Kenya.

On his retirement from the civil service, Nyachae was arguably one of the richest and most prominent personalities from Kisii County. During his tenure in the civil service, he had used his influence to amass immense wealth, most of it corruptly. Being the richest man in the county enabled him to gain political power and influence. Using his wealth, he easily vied for and won a parliamentary seat in 1992. His election to parliament 1992 in Nyaribari Chache Constituency was instrumental in his entry into the Moi government as a powerful cabinet minister first for Agriculture, then 1998 for Finance.

In 1999 he fell out with Moi and resigned from the government after having been moved to the less influential ministry of Industry. He also left Kenya African National Union (KANU) to join the opposition FORD People, by then only a small party with some roots in Central Kenya and three deputies in parliament. Source-https://en.wikipedia.org/