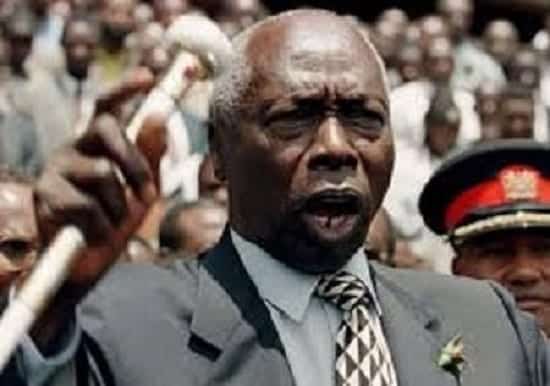 Former retired President Daniel Arap Moi is the long serving president in the country’s history. Moi ruled for a record 24 years and his uninterrupted reign came to an end in 2002.

Moi ruled for a record 24 years and his uninterrupted reign came to an end in 2002.

In his 24 year rule according to political pundits, Moi rubbed shoulders and disagreed with his political enemies  on key issues among them multi-party system,  human rights and rule of law.

Here are some of the tricks the retired  president used to rule for 24 years.

The retired president reign was full of historical and symbolical songs.

Moi used this tactic to bring Kenyans together and castigate people he claimed were enemies of the country.

The retired president official events and functions were full of such  songs that in away bonded Kenyans together for 24 years during his reign.

Some of the songs and lyrics coined during Moi’s rule are ‘Tawala Kenya Rais Moi’, ‘Fimbo Ya Nyayo Yatuongoza’ and ‘Sisi Wanakenya tumeungana’ among others.

The use of lyrics earned Moi huge following especially among school-going children.

The Nyayo philosophy saw the retired president establish a name for himself.

Moi advocated for development, peace and unity among  Kenyans u through the Nyayo philosophy or slogan.

In fact many Kenyans mistook ‘Nyayo’  to be part of Moi’s name.

The philosophy rhymed well with the development projects he initiated.

The ‘Maziwa Ya Nyayo’ was a project under Moi’s leadership.

The former president was feared and it was believed that one would be arrested for mentioning his name anyhow.

It is during Moi’s tenure that people and politicians who dared to question his style of leadership were arrested and detained at the famous Nyayo House torture chambers.

The late politician Kenneth Matiba also underwent through torture at the dreaded chambers.

The retired president was reluctant to embrace constitutional reforms.

In 1991 he was forced to repeal section 2A of the constitution to allow for multi-party system.

Moi had adopted the single party system that saw his KANU party dominate.

It is believed that Moi employed use of propaganda to confuse his political competitors.

He employed spies to seek information on his competitors and used it to punish them politically.

The retired president is now among the experienced politician’s and his political counsel and wisdom is being sought by politicians ahead of the 2022 general election.

Governor Kidero to be charged for slapping Shebesh