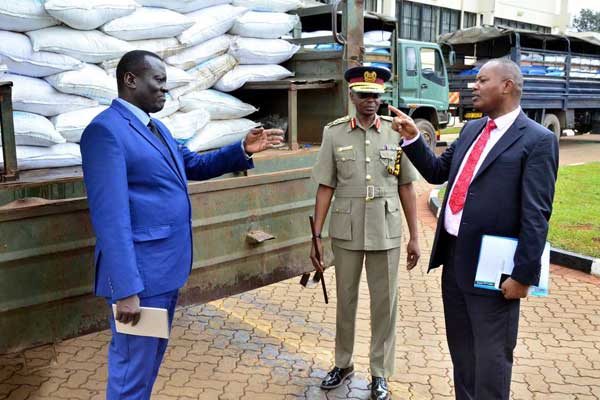 The High Court has barred police from arresting a Kirinyaga businessman and his wife over sale of contraband sugar seized in Ruiru last week.

Justice Gitari certified his criminal miscellaneous application on violation of human rights as urgent and directed that the businessman appear in court after seven days when the respondents in the case can respond.

Mr Kuria listed the attorney-general, inspector-general of police, director of public prosecutions and director of criminal investigations as respondents in the matter.

VIDEO: Drama as Kirinyaga Woman Rep Ngirici is confronted by…

“The applicant is apprehensive of being unlawfully arrested by the police on the basis of a mere speculation and a concerted conspiracy theory— an act that will culminate in greatly injuring his constitutional rights and fundamental freedoms,” the lawyer told the judge.

Mr Kuria, the court heard, is a businessman and the director of Paleah Stores Ltd.

According to the lawyer, he has been running business after procuring all the necessary licences from the relevant authorities.

“The intended arrest will violate his right as it will deprive him of his freedom to liberty without a justifiable cause contrary to Article 39 (1) and further subject him into physical and psychological torture and treat him in a manner that is cruel, inhuman and degrading contrary to constitution,” he told the judge.

Mr Kuria indicated that he is duly licenced by the Sugar Board of Kenya to import, distribute, re-package and brown and white sugar.

He said sometime in June 9, 2018, he bought about 600 bags of sugar from Hydery (P) Ltd, which is also licensed to undertake sugar business in the country.

“Upon purchasing the sugar, Hydery (P) Ltd issued the applicant with copies of the importation documents— namely an E-slip and a delivery order. The sugar was certified by AFA Sugar Directorate on August 25, 2017,” lawyer Njiru told the judge.

He said the purchase of the sweetener followed its importation certified by the Port Health Fit For Human Consumption on August 23, 2017.

The sugar was certified by the Radiation Protection Board on August 23, 2017 and the same was duly passed, the judge heard.

Lawyer Njiru said the businessman engaged Hydery (P) Limited upon satisfaction that it had complied with the requisite statutory sugar importation rules.

He said the sugar was also cleared by the Kenya Revenue Authority on August 22, 2017 and following the purchase and delivery, he stored the said consignment in his godown on Eastern by-pass.

“On June 11, 2018 officers from police service and director of public prosecutions, on mere suspicion that is actuated with malice, bad faith, ill motive and in absence of proper detailed investigation, that should have covered even the aspect of documentary investigations, broke into the go down and confiscated the sugar that had been supplied by Hydery (P) limited,” stated the lawyer.

He complained that government agencies have decided to implicate Mr Kuria in contraband sugar ring and are threatening to arrest him for an  undisclosed offence.

According to him, police have not carefully taken cognisance of the circumstances surrounding the purchase of the said sugar.

“The sugar that has now been confiscated by police has met all the requisite statutory requirements that have been set down by the Sugar Board of Kenya,” Lawyer Njiru added.

Justice Gitari further heard that Mr Kuria has on several occasions presented himself to offices of the inspector-general and director of public prosecutions to answer to any query regarding the purchase, possession and fitness of the sweetener.

However, he indicated, the officers have blatantly decided to ignore him “in bid to harass, humiliate and embarrass” him.

These actions, the lawyer claimed, will violate Mr Kuria’s constitutional rights under Article 28, which protects his dignity.

The case will be mentioned on June 21, 2018 at the High Court in Kerugoya.