VIDEO: I don’t need permission to ‘tanga tanga’, I must serve Kenyans – Ruto

Deputy President William Ruto has told those opposed to his tours across the country that he is simply executing his constitutional duties.

Ruto said on Monday that no one can dictate Jubilee Party’s agenda as it has been clear since 2013.

Addressing wananchi at Rigoma market after commissioning the Sh430 million Keroka Water Project in Nyamira county, he said the government will continue implementing the Big Four agenda despite opposition from some quarters.

“I don’t need anybody’s permission to engage the people on matters of development. I am the principal assistant to the President, who has given me permission to work for Kenyans. Who are some people to question me on this?” Ruto posed.

“I am the Deputy President and I have been given a job by Kenyans. I will not seek permission from those in opposition to tour any part of the country to engage the people on issues pertaining of development. I will continue with my development tours across the country and if some people are uncomfortable, let them continue feeling so because I am not going to stop.”

TIME TO WORK TOGETHER

Ruto also asked Kenyans to demand accountability from their leaders.

It is the responsibility of leaders to deliver on the pledges they made during the elections, he said, adding they should avoid activities without positive impacts on the people.

The DP further said that it is time for leaders to put aside their political differences ad take a common stand in addressing challenges facing Kenyans.

“We will be judged by our actions. Let’s do away with baseless politics and embark on service delivery to our people so that they can uplift their living standards.”

The Deputy President said the government will serve all Kenyans irrespective of how they voted in 2017.

“We are ready tow work with all leaders in implementing the Big Four agenda for all Kenyans. We will serve all Kenyans equally irrespective of their political affiliations because this is a government for all of us,” he said. 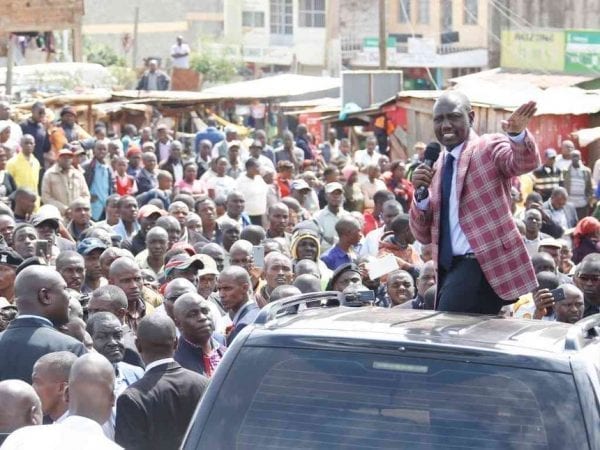 HUNDREDS OF MILLIONS IN PROJECTS

Ruto commissioned phase two and three of the last mile electricity project and the revival of a building at Keroka hospital.

The Deputy President said the national government will use Sh100 million to revive operations at the hospital by completing the building that stalled for the last 30 years due to lack of funds.

“This project stalled in 1992 because of bad leadership. But now that you have a leader who is focused on development. We will work together to ensure it’s completed within the shortest time possible,” he said.

He announced that the government will install a new CT-scan at Sh150 million.

At Matangi trading centre where he launched the two phases of the last mile project, he said the government allocated Sh500 million for the county to implement the project.

The Deputy President said the Keroka Water Project, valued at Sh430 million, will be funded by the government and African Development Bank.

Some 60,000 people in Nyamira and Kisii counties will benefit once it is completed.

The project is part of phase two of the East African Regional Lake Victoria Water Supply and Sanitation Programme and is being implemented by five East Africa partner states.

Chelugui noted that the water project will improve the health of communities in the Lake Victoria Basin and reduce the pollution of Lake Victoria.

The leaders said they will support the government in implementing its development agenda.

Momanyi and Mose said the Kisii community will rally behind Ruto when the time comes as the focus at the moment is on development.

“We are ready to be called your sycophants so long as it is for the benefit of our people,” Momanyi said.