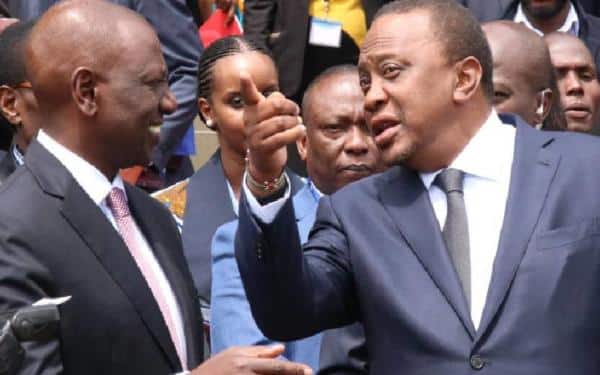 Viral Video of Jobless Woman Unites Kenyans Against Uhuru : A teary woman with a letter of dismissal broke hearts as she narrated how she had been laid off from work.

Many Kenyans went on to narrate their own ordeals at workplaces, pinpointing fingers at the government and how its actions have rendered many of them jobless.

In the video posted on Twitter by one Vynnie Isaac on October 2, the woman narrated how painful and hard her life would be after her dismissal.

She emotionally poured her sorrows out through a selfie video. Reports alleged that she may have been an employee of one of the betting firms closed over the government’s stringent laws.

“I am heading home and this is my letter of dismissal indicating that my job is over. At the end of this month, I won’t be earning and I know this is happening to someone else out there.

“I am a mum, everything is on me this month and I will heavily feel the pinch. I have a nanny who looks after my child. She will also be affected as she will be jobless,” the woman narrated how losing her job affected several others in a chain.

She went on to plead with Kenyans to analyse how many youth were suffering due to lack of jobs and stringent laws in the country.

“I have a friend, a mum and a sister who look up to me. We need a roof over our heads, rent to pay too and school fees to pay. We need to think as Kenyans and find out what is going on with the government during this hard economic time,” she cried out.

Her woes were shared with many others online.

“Great question. Next time we go voting, let us remember all we have gone through and make the right choices. This is all connected to our politics,” Oria V.O. reiterated the woman’s plea.

“Given Uhuru-Ruto ineptitude leadership especially on matters economy, let Kenyans know that tribal bigotry is a disaster. You’ll shout today Kumira Kumira but when factories and companies close, we are all affected. Vote without emotions,” Abuga Makori lamented.

“I have never been employed, at least you had a good life and you have savings since the company had advised you guys for 3 months. This is a slap in our faces, welcome to our side,” Isaac Muiruri stated.

Betting firms Sportpesa and Betin shut down after the government came up with harsh laws on gambling. A video of Sportpesa CEO Ronald Karauri sending home hundreds of employees also went viral online.

A private supermarket also laid off 200 employees in September 2019 after it emerged the struggling retailer planned to exit the Kenyan market.

Nicholas Gachara, a private financial adviser at Tax and Accounting, informed Kenyans.co.ke newsroom that the unemployment situation in Kenya will worsen due to the stringent government laws.

“The government is the biggest consumer of the government but through its tax laws affects that spending. Kenyan taxes are among the highest in the region (East Africa). They reduced Value Added Tax (VAT) but increased tax on fuels, that is double taxation, making things more expensive. Companies thus invest in other countries other than Kenya. If company’s suffer in Kenya, then employees are affected and will not have spending powers.

“The government wants to raise the interest cap, raising Kenya’s borrows power. This means Kenya will move to local banks to take loans. Banks will prefer the government than the people. This means they will charge high interests as they are afraid the youth are a security risk and may refuse to pay loans. They look at the government as risk free. The youth thus cannot get loans to employ themselves and others,” Gachara explained.