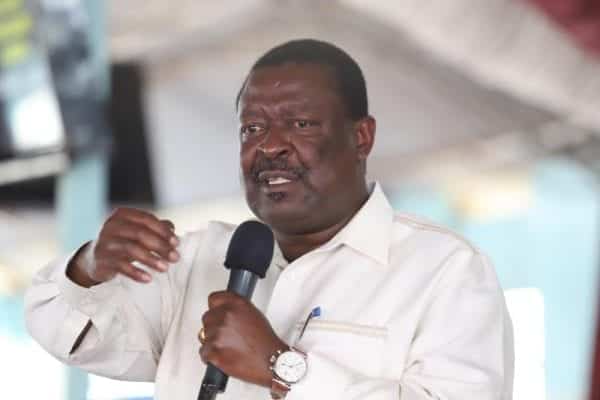 Amani National Congress leader Musalia Mudavadi has admitted that the opposition has been shaken and weakened by the recent handshake between President Uhuru Kenyatta and Raila Odinga.

Mudavadi, a former Prime  Minister and  a key figure in the National Super Alliance (Nasa) said the opposition was  at the cross roads and can no-longer effectively speak for the Kenyans on serious  political and governance and political issues, including corruption.

“The opposition has been rattled and shaken.  It is not as vibrant as it should be. We owe Kenyans a strong opposition,” Mudavadi told reporters outside the Redeemed Gospel Church in Kisumu on Sunday after attending prayers.

He added: “People (in the opposition) are now nervous. Even those in Parliament and the senate cannot speak loudly because they don’t know whether or not they will be annoying some people.”

Mudavadi spoke after he was asked why they no longer hold joint press conferences as an opposition to address issues affecting the Kenyans.

In reference to the current debate on corruption and other burning political issues, Mr Mudavadi said even the fiercest debaters in Parliament had taken the back seat as they did not know how their comments would be interpreted.

“They don’t know how to handle issues because they are not sure whether they would be accused of rocking the boat from inside. They are just tip toeing even on very serious matters,” said Mudavadi.

He said although he supported the peace pact between the opposition and the Jubilee government but insisted that the opposition must never tire from telling the stat of bad things happening in the country.

“Acknowledging and working with the government on certain issues should not be at the cost of killing the opposition,” said Mudavadi who once served as a Vice President and Sabatia MP during the Kanu regime.

But he said all was not lost as the opposition will soon rebrand and do its job as expected by Kenyans.

“We are working on it.  I am personally working on it and you will soon see a very aggressive opposition,” said Mudavadi.

Without giving details, Mudavadi said the opposition will get it grooves back in the coming days. “We owe the people a strong opposition and we will ensure this happens,” he added.

The ANC leader, his Wiper Democratic Movement counterpart  Kalonzo Musyoka  and Ford  Kenya leader Moses  Wetangula were  initially opposed to the  Raila-Uhuru Kenyatta handshake  after they were were  kept  in the dark about  it  but  has  since went silence about it.

Mr Musyoka even shook hands with President Kenyatta, his deputy William Ruto and Raila to support the national reconciliation during the national prayer meeting held in Nairobi later last month.

Although MPs  allied to Raila have supported  his  new  found friendship with President Kenyatta  and have been publiscly supporting it, some of  those from a faction of Jubilee, ANC, Wiper  and Ford  Kenya  continue to criticism it, saying it  was Raila’s  game plan for the 2022  elections.

Raila  and President Kenyatta, on their part have said  their cooperation, cemented  with the March 29  handshake  at the doorsteps  of Harambee  House was  meant  to build  bridges among Kenyans  and had  nothing to do with the 2022  elections.