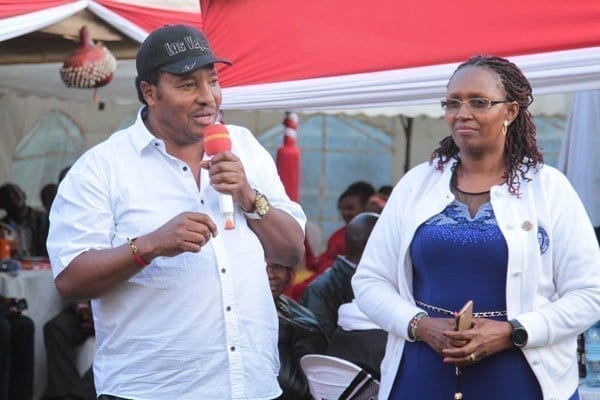 The wife of Kiambu Governor Ferdinand Waititu, Susan Wangare, and 14 other people have been arrested in Nairobi.

Mrs Waititu was arrested by Nairobi City County government officers on Wednesday for erecting a storey building without the requisite approvals.

The other suspects include owners of Jamii Bora building on Koinange Street in the capital’s central business district and Delta Hotel.

They were taken to cells at City Hall where they spent some hours before Governor Mike Sonko, a close ally of Mr Waititu, intervened and ordered her release.

In a leaked phone conversation between Mr Waititu and Mr Sonko, the Nairobi county boss is heard telling his friend that he will release the woman.

Mr Waititu reminds Mr Sonko of their friendship and how “they have come from far”.

He then advises Mr Waititu to stop reckless talk, opposing the ongoing demolition and reminds him that his wife is on the wrong as she has no approval papers from City Hall.

He later promises to provide Mrs Waititu with the necessary papers.

But Mr Waititu insists that Mr Sonko release all the suspect, to which the Nairobi county boss tells him to call “the boss” or Waita as his hands are “tied”.

Mr Sonko then calls one Mr Ochanda, the officer who arrested the 15, to connect him to Mrs Waititu.

“Apply for approvals. It is wrong to build without approvals. There is an order from above and I am even contravening laws releasing you. I have instructed that you be released,” he tells her amid audio problems.

Mrs Waititu, however, informs him that she had made application for the approvals but they have delayed.

Mr Sonko then instructs Mr Ochanda to write for Ms Wangare a Sh10, 000 cash bail but leave the rest in detention as a lesson that building without approvals is an illegality.

Mr Ochanda tells Mr Sonko that the Jamii Bora building is already on the 8th floor to which the City Hall boss says “that is unacceptable” in the CBD but will release Mrs Waititu because “she is not the contractor”.

Mr Waititu has been trending on social media since Sunday for openly opposing the ongoing crackdown on buildings on riparian land in the city.

This was after he suggested that instead of bringing down buildings worth billions of shillings, the Nairobi regeneration team should consider moving the river.

“If your house is near a river, you should be told to move the river at [your] own cost. Demolishing houses is not a solution. Honestly speaking, it’s such a big loss,” he said during a thanksgiving service for Kikuyu MP Kimani Ichung’wah at Gikambura.

And for this, Mr Sonko told him to keep off the affairs of the city county.

How to move yourself forward-Express patience, relax and be yourself

Why Eric Omondi is Not Amused by Kenyans

What is going on at the Kenyan Embassy in Washington DC?

It was one tough childhood for Victor Wanyama