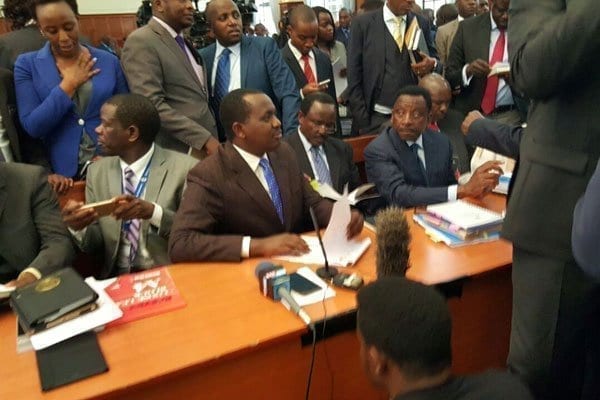 Mr Haji, through his deputy Dorcas Oduor, on Friday alleged potential conflict of interest in the battle before the anti-corruption court in Nairobi.

The lawmakers, Mr Haji argued, are members of parliamentary committee proceedings that grill his office over accountability.

Some of the senators on the deputy chief justice’s case are James Orengo (Siaya), Mutula Kilonzo Jnr (Makueni) and Okongo Omogeni (Nyamira).

While Mr Haji claimed a potential conflict of interest, he left it to the court to decide whether to allow them in the case.

In response, Chief Magistrate Lawrence Mugambi said it would not be practical for all 44 lawyers to address the court.

The magistrate said only three advocates had so far addressed the court on behalf of Justice Mwilu and only one for Mr Muluvi.

“The only thing that the court will do is to limit the time. The fact that several advocates have come to court does not mean they will all address the court” Mr Mugambi ruled.

The DPP also fought the amended High Court order that Judge Mwilu’s lawyers presented to the magistrate to stop her criminal prosecution over alleged corruption.

Ms Oduor, however, allowed the order to stand.

Blow to Haji as criminal proceedings against DCJ Mwilu suspended