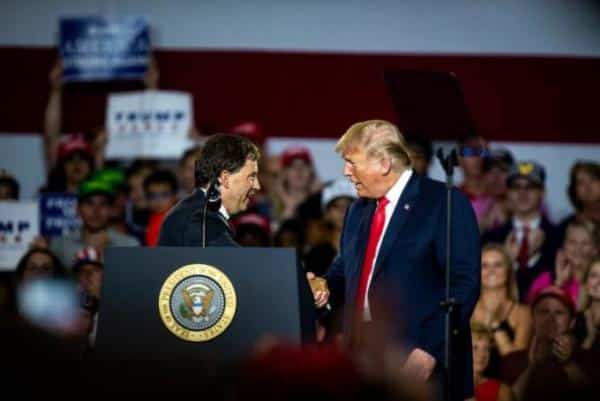 WASHINGTON — The Trump administration is advancing a plan to punish legal immigrants for accepting food stamps, public housing and other government benefits they are entitled to — a strategy that appeals to conservatives and could help to galvanize Republican voters before the midterm elections.

The proposed rule first surfaced last year. Last month, the White House Office of Management and Budget published a notice that it was under consideration. A Trump administration official said Tuesday that details of the proposal were still weeks away from being finalized and made public.

But already, the rule could serve as a talking point for Republican candidates seeking to counter an expected wave of Democratic enthusiasm, seizing on President Trump’s claims that immigrants are an outsize drain on American taxpayers.

As drafted, the rule would authorize federal officials to revoke legal resident status from legal immigrants who accept government assistance currently available to them.

It essentially concludes that those immigrants are more likely to become “public charges” — dependent on programs like Medicaid, children’s nutrition aid and even housing and transit subsidies.

Many of Mr. Trump’s supporters — voters who will be key to victories by Republicans in close contests this fall — believe that legal immigration has cost them jobs, depressed wages and forced higher taxes.

Recent studies, however, have found that increased legal immigration has led to higher, not lower, wages. Other studies by social scientists suggest that immigration leads to greater, not lower, productivity in the United States and somewhat lower prices for some goods and services.

A 2016 report by the National Academies of Sciences, Engineering and Medicine found that while first-generation immigrants can be more costly to governments, subsequent generations “are among the strongest economic and fiscal contributors in the U.S. population, contributing more in taxes than either their parents or the rest of the native-born population.”

Such studies are unlikely to convince the president’s most ardent supporters, especially in the face of a barrage of campaign commercials that are certain to be broadcast in the months ahead.

Republicans across the United States have already embraced the president’s hard-line messaging about illegal immigration and crime. They are betting that they will benefit politically the way that Mr. Trump did during the 2016 presidential campaign.

At a rally on Saturday in Ohio, the president tried to bestow the issue on Troy Balderson, the embattled Republican House candidate in Tuesday’s special election. The contest — the final special election before the November vote — was notable for its surprisingly tough challenge from a Democratic opponent in an overwhelmingly Republican district.

“A vote for Troy’s opponent is a vote for open borders, which means massive crime,” Mr. Trump said at the rally. “We want our country to be a sanctuary for law-abiding Americans, not criminal aliens!”

The crowd responded with enthusiastic chants of “build the wall!”

On its own, the proposal for legal immigrants who accept government aid is unlikely to be a political driver in the midterm elections, said Jessica M. Vaughan, the director of policy studies for the Center for Immigration Studies, a group that supports stricter immigration policies.

“But I do think it will be well received by voters who tend to believe that our immigration system needs to be tightened, and that people applying for immigration benefits meet standards for self-sufficiency,” she said.

The proposed rule would allow immigration caseworkers to consider “heavily weighed negative factors” in determining whether green card candidates and other legal residents are likely to become dependent on government assistance, according to a leaked draft of the proposal. Those “negative factors” include accepting common tax credits and other welfare programs, like food stamps, transit assistance and health programs for children.

It would exclude some entitlements from being considered in the “public charge” determination — like immunizations, attending public school, receiving free or reduced-price school lunches or earned benefits such as disability insurance and Medicare.

Unauthorized immigrants are already ineligible for nearly all public benefits. The rule could force even legal immigrants to voluntarily forgo benefits to avoid risking being deported — with severe impacts, especially for children.

Trump administration officials said the proposal intends to promote fiscal responsibility by enforcing longstanding rules that require immigrants to support themselves financially when they enter the United States.

A Homeland Security Department official familiar with the proposal said that more than half of all immigrant households use one or more welfare programs. The official, who spoke on the condition of anonymity because the plan was still being considered, said the Trump administration considers providing benefits to immigrants as deeply unfair to American taxpayers.

Katie Waldman, a spokeswoman for the department, said that any changes that are made would ensure that the government is careful in how it spends taxpayer funds as it upholds current laws in processing benefit requests by immigrants.

As a candidate, Mr. Trump made an immigration crackdown one of his signature — and most divisive — campaign themes. Since Mr. Trump took office, several of his top aides — including Attorney General Jeff Sessions and Stephen Miller, the White House domestic policy adviser — have pushed to shut down illegal immigration and drastically limit legal entry into the United States.

Some of those efforts, including a “zero tolerance” policy that has resulted in separating migrant children from their parents, as well as Mr. Trump’s call for a wall along the southwestern border, have been stymied by Congress and the courts.

The proposal to change the welfare rules for immigrants is part of a broader effort by the Trump administration to curb what the president and his aides say is rampant fraud by immigrants using public benefits.

The Homeland Security Department has also proposed using money collected from immigrants — including to pay for green cards — to hire hundreds of special agents to focus on immigrant benefit fraud.

That proposal, as outlined in a fiscal 2019 budget document, was in response to an expected increase in investigations into identity and benefit fraud.