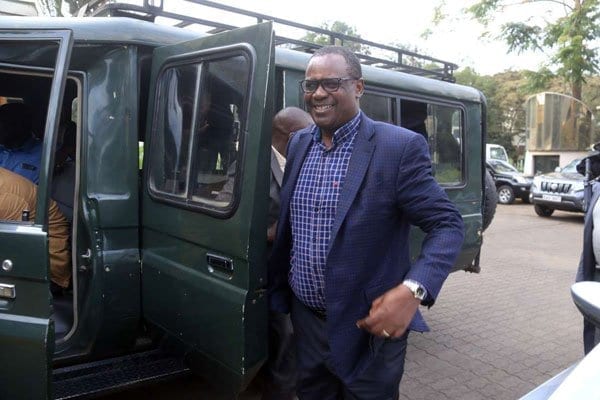 The anti-corruption commission has said it has been conducting investigations into allegations of abuse of office, money laundering and bribery against Dr Kidero and the others.

Other allegations are conflict of interest and failure to protect public property.

Pursuant to Section 35 of the Anti-Corruption and Economic Crimes Act, the commission then submitted a report to the DPP on the results of the investigations through a letter on July 13.

Upon review of the report and recommendations, the office of the DPP confirmed on Wednesday it concurred with EACC that there is sufficient evidence to charge the suspects with several offences of corruption and economic crimes.

“The DPP has independently reviewed the file and material submitted to him and is satisfied that the persons named are criminally culpable jointly and severally,” the DPP communicated last evening.

VIDEO: Mike Sonko assaults journalist as he enters EACC for…

41 Siaya MCAs To Be Grilled Over Sh8.2 Million Trip To…

The Nation gathered that the individuals are likely to be charged with five counts related to graft.

They are conspiracy to commit an offence of Economic Crime, abuse of office, fraudulent acquisition of public property, dealing with suspect property and unlawful failure to pay taxes to a public body. The amounts involved are Sh200 million.

On Wednesday, Mr Kidero claimed he was unaware of the reasons for his arrest. In March, a damning report by audit firm KPMG, which covered revenue, debts, cash and banking as well as assets, indicated that Sh21 billion was not accounted for by Dr Kidero when he left office last year.

The matter has been the subject of discussion after the High Court in June ruled that EACC has investigative powers on economic crimes.

One case was filed by the Evans Kidero Foundation. The foundation had also protested the fact that Mr Evans Kidero was summoned by the EACC regarding investigations touching on Mumias Sugar company, in which he served as the managing director between 2003 and 2012.

While serving as Nairobi governor, he was summoned on investigations regarding a deal between his administration and a Chinese company.

Mr Kidero said he furnished EACC with the necessary information in both instances but the commission went ahead to seek for search warrants from the court.

He said EACC officers sought to obtain warrants to inspect and lift copies of statements, account opening documents, original cheques, mandate cards, bankers’ books and other materials over “fraudulent transfer of public funds to his personal accounts as well as involvement in corrupt practices”.

Recently, Dr Kidero denied financial misappropriation allegations levelled against him and his administration.

This followed fresh investigations against the governor and nine county officials who served during his tenure over suspected embezzlement of Sh7.8 billion.

The Financial Reporting Centre wrote to the Directorate of Criminal Investigations (DCI) and the Ethics and Anti-Corruption Commission (EACC) to investigate Dr Kidero, the nine former officials, directors of four pharmaceutical companies and bank officials.

They are accused of withdrawing the money from a number of county collection accounts between April 2014 and August 2017 through structured cash withdrawals.