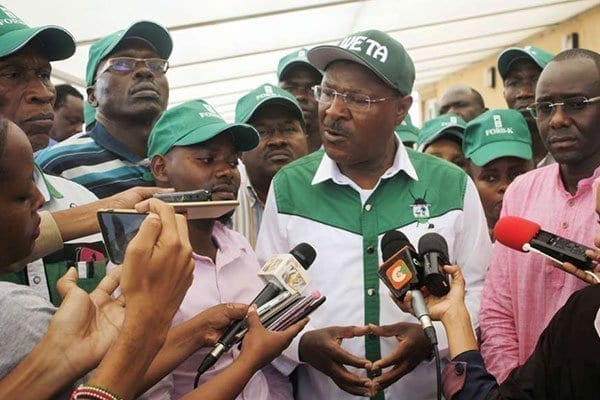 Addressing mourners at the burial of Fanice Anyango, the mother to Mr Festo Fadamula who contested the Mumias West parliamentary seat in 2017, Mr Wetang’ula urged western Kenya to lock Mr Odinga out of the region’s politics.

The senator said Mr Odinga has turned the region into a laughing stock.

“It is time for western to unite and forge its destiny. We need to agree on this,” the Ford Kenya leader said.

Related Content
Raila’s unfinished business
Mudavadi spills the beans on Raila ‘swearing-in’
“My coming together with ANC leader Musalia Mudavadi and Devolution Cabinet Secretary Eugene Wamalwa shows we are on the right path as a region,” he said.

The two said the region is united “as was evident when it supported Mr Odinga’s presidential bid in 2017”.

“Some people are bothering us with unity calls. Who told them we are not united? We are not at war with anyone,” Mr Wanjala said.

He added that the same leaders have failed to show their influence in the region by “calling for public rallies and have instead confined themselves to funerals”.

“You insist that Raila supports a Luhya presidential candidate yet you have not shown your clout. Put your house in order first,” Mr Wanjala said.

Dr Mudenyo dared those threatening to leave the National Super Alliance to do so “instead of airing their grievances in public gatherings”.

“You said the divorce would be messy but it never came to pass. The best you can do is to leave Nasa in peace,” Mr Mudenyo said of Senator Wetang’ula.

Earlier, Mr Washiali said Mr Odinga is using the handshake with the President for political gain.

“He should focus on helping the President realise the ‘Big Four’ agenda,” Mr Washiali said.

He laughed off the Tuesday meeting “which Mr Odinga asked leaders to forward the names of people to be considered for government positions”.