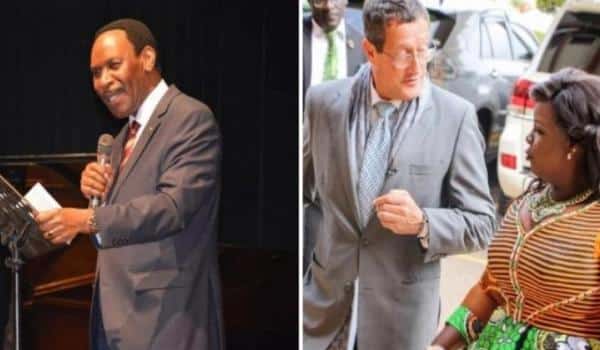 Kenya Film and Classification Board (KFCB) boss, Ezekiel Mutua is under criticism for defending the Kiunas after they hosted an openly gay journalist Richard Quest.

Kenyans are calling him out for taking a different stand when it came to the CNN journalist.

CNN journalist Richard Quest, who is openly gay, was in Kenya on assignment to cover Kenya Airways’ maiden direct flight to the United States.

“So guys are on Rev. Kathy and Bishop Kiuna for letting CNN top journalist Richard Quest into their church today, after his confessed gay lifestyle?

Margaret Wanjiru out of ICU,Still hospitalized but doing…

Honestly? In my view Quest’s visit to the Jubilee Christian Church today and his interview with Rev. Kathy Kiuna is one of the highlights of his visit, besides his coverage of the KQ inaugural flight to New York tonight and the Mpesa revolution.

If Quest’s main mission was to highlight life-changing ventures and innovations in Kenya, then today he was in the right place.

Rev. Kathy and Bishop Kiuna are the true exemplifications of the Kenyan spirit of self-belief, resilience, hard work and faith.

They have conquered many odds to be who they are today. Like or hate them, the Kiunas have influenced millions.

No one can deny the fact that the Kiunas have given hope to many youths. Theirs is the true story of the audacity of hope. Such is the unique stories that need to be highlighted about Kenya.

Quest may be gay, but he is a top-notch journalist who can sense newsworthy stories with unique angles.

The Kenya Film Classification Board cleared him and provided gratis licenses for his entire crew because we trusted in his professional ability to highlight the real stories about Kenya and her people.

His sexual orientation has nothing to do with his work. Let him be. Let the Kiunas be. Quest was not in church to sell gay ideology. He was there to cover a story of resilience and hope.

He chose to highlight variant topics of hope and determination and that is a good thing.”

Watch All Videos on Inauguration at Kasarani and State House Ceremony

Who Moved My Cheese?

Goodies:Jubilee to give MCAs ward offices