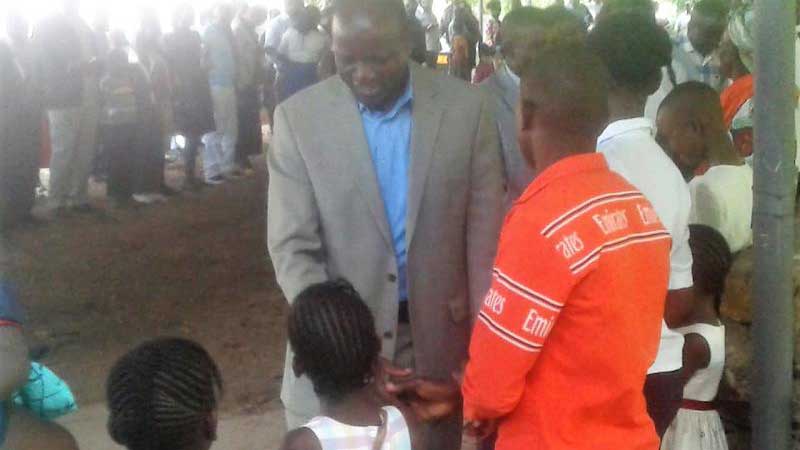 Governor Okoth Obado shocked supporters and a congregation after showing up at a church unannounced.

Mr Obado’s appearance at the Upper Hill SDA Church in Migori town came as a surprise as his handlers had earlier said he will spend a few more days in Nairobi after he was freed on a Sh5 million bail following his arrest over the murder of university student Sharon Otieno.

Accompanied by a few of his family members, Obado drove into the church compound shortly after 9am and sat quietly among other faithful.

In a brief address to the congregation, he asked for prayers, saying he has been facing hard times.

“God has been with me and I am requesting for more prayers,” he said.

He later mingled with the congregation, greeting them as church members mobbed him.

“He drove in silently and only a few people noticed him,” said a church goer.

Sources told the Sunday Standard that Mr Obado arrived in Migori on Friday evening on a day his handlers claimed he was resting in Nairobi, and went straight to his rented house in the town- commonly known as “State House Migori”.

It is in this house where he will live most of the times since the stiff bail rules set by High Court Judge Jessie Lesiit, bars him from visiting his palatial home in Rapogi, which is beyond the 20 km radius restriction.

Justice Lesiit had cautioned Mr Obado against traveling 20km beyond Migori and against discussing the Sharon murder issue at any public rally.

Yesterday, a source close to Mr Obado, said the governor will obey the restrictions and will use the rented house, set up in a leafy part of the town as his new home.

“He will be operating from the State House.   He will not go to Rapogi because this might put him in trouble,” said the official.

The Sunday Standard has also established that after the Church service yesterday, Mr Obado retreated to his house  where he continued  to receive guests- mainly his  political friends, senior  County Staff  and village mates . from Uriri Sub County.

On Thursday, the day he was freed from the Industrial Area Prison where he had spent 34 days, Mr Obado yesterday issued a statement, saying he was ready to continue with his duties after missing in action for over 35 days.

In a statement posted in his official Facebook Page, Obado said he was ready to resume his deputies and thanked those who had stood with him.

“Let me take this opportunity to thank the People of Migori, Members of the County Assembly of Migori, the Staff of the County Government of Migori, my supporters, my legal team, friends and my family for standing with me during this trying moment,” Obado said.

He added: “I also thank the court for listening to our request and granting me the bail. This has now given me opportunity to effectively work for the people of Migori as their governor.”

Mr Obado is facing the charges alongside his aides- Michael Oyamo and Pascal Obiero said he will respect the court as he goes about his duties.

“I promise to respect the court and abide by the conditions it set,” said the governor.

He continued: “I urge all our leaders, regardless of their political or ethnic affiliations, to embrace peace and unity so that as a family we steer forward the development agenda of our county.”

Mr Oyamo and Mr Obiero were  however, denied  bail and will be in prison until the hearing of the case  start next year.

Mr Obado was arrested 34 days ago and charged with the murder of Sharon, the 26 years old Rongo University student, who was 7 month pregnant. She had earlier been kidnapped from Rongo, alongside Nation journalist, Barack Oduor.