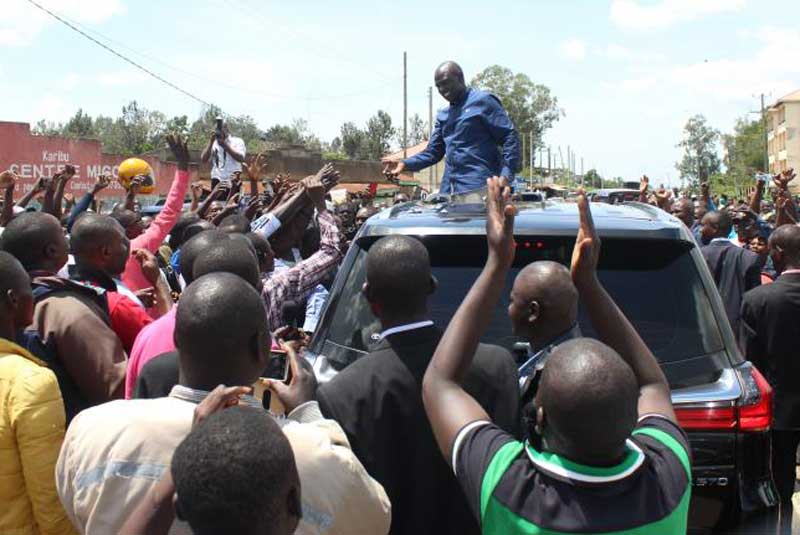 Only one of the 14 MPs from Luo Nyanza accompanied Mr Ruto as he launched projects in Migori and Homa Bay counties yesterday.

This was his first visit to Luo Nyanza since last year’s General Election.

Karachuonyo MP Adipo Okuome was the only ODM MP who appeared at Mr Ruto’s functions, alongside Migori Governor Okoth Obado.

Ruto, who arrived in Homa Bay on Sunday evening and spent the night at the Rusinga Lodge, made a whirlwind tour of the two counties dishing out Government goodies.

Apparently eager to mend fences with locals who have accused him of undermining Raila, Ruto said he had no bad blood with former prime minister.

“I have nothing against Raila. In fact, we are working closely with him and President Uhuru Kenyatta under the Building Bridges Initiative brought about by the handshake,” said Ruto.

In Migori, Obado was stepping out for his first ever public function since a court granted him bail over Rongo University student Sharon Otieno murder case.

Out of the county’s eight MPs, only Kuria East MP Marwa Kitayama and his Kuria West counterpart Mathias Robi, who are both Jubilee MPs, accompanied the DP.

Even two area MPs – Junet Mohammed (Suna East) and Peter Masara (Suna West) – were absent. They said they had not been invited for the function.

When Ruto flew to Muhuru Bay, Nyatike MP Tom Odege was also missing. Mr Odege later said he had been kept in the dark about the function.

Speaking in Migori town, Ruto said Kenyans did their part in last year’s General Election and it was time to reap the fruits of their labour.

Mr Junet said Ruto’s tour was political, but disguised as a development one.

Ruto, however, took a jibe at leaders who he claimed were not ready to work with the Government, noting their score card would be rated in the next four years and most of them would fail.

“I have heard that some people did not want me to visit this area today (yesterday). They should be ashamed since here I am in my capacity as the Deputy President of the Republic of Kenya to serve the people who elected us,” said Ruto.

The DP announced that Sh1.2 billion had been set aside for electrification targeting 25,000 people in Migori County.

He said the Government would build four new technical colleges in Kuria East, Kuria West, Suna East and Suna West, besides providing a bursary of Sh30,000 for every youth enrolling for studies in the institutions.

Speaking at Masara Centre, where he launched a street lighting programme, Ruto asked the residents to tell their MP to look for him since he had Sh150 million for the construction of a technical college locally.

The DP also launched the Masara-Suna-Kehancha road, Awendo-Mariwa-Oyani road and promised to do the same for the Masara-Sori road next month. He said there was good progress in construction of the Kisumu-Migori-Isebania highway.

Mr Obado termed Ruto’s trip to the area a blessing and asked him to visit often since he had proven to be a development conscious leader through his frequent trips countrywide.

In Karachuonyo, Ruto told voters to hold their leaders to account for development.

How Government Official Used Governor to Cheat On Wife

Photos:Campus Student Rescued after 2 Weeks Locked in a Coffin