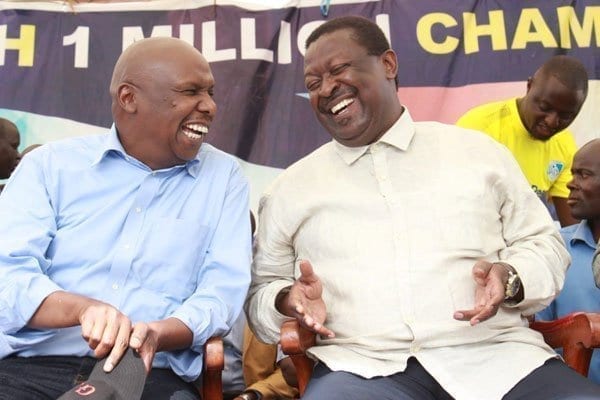 A political alliance bringing together opposition chiefs Raila Odinga, Musalia Mudavadi and Baringo Senator Gideon Moi could be in the offing, the Saturday Nation has authoritatively learnt.

Multiple sources reveal allies of the three opposition leaders, backed by a section of politicians from the Mt Kenya region were carefully crafting the alliance, which complicates deputy President William Ruto’s march to State House come 2022.

The political events of earlier in the week, which saw Mr Mudavadi host scores of politicians from across the country, including Mr Odinga’s allies, signalled an emerging alliance built around the clamour for a referendum.

Central in last Wednesday’s meeting at Mr Mudavadi’s Vihiga backyard was Jubilee national vice chairman David Murathe, a close ally of President Kenyatta since his days in Parliament between 1997 and 2002.

The sources confided in Saturday Nation that an after-party had been planned at the Ugenya home of Siaya senator James Orengo at which Mr Murathe and former Mukurweini MP Kabando wa Kabando were expected to attend in the spirit of the emerging alliance. Mr Odinga attended the party but Mr Murathe and Mr Kabando opted out following the demise of a close family member of Lugari MP Ayub Savula who was also scheduled to attend.

At the heart of the anti-Ruto alliance is the referendum push which the opposition chiefs hope to use a rallying point for their unity. The opposition chiefs also expect to use the referendum and change the constitution to expand the executive, an eventuality which President Kenyatta openly supported during his tour of Kisumu three weeks ago when he voiced the need to create an all inclusive parliament and remove the winner-takes-it-all presidential contest.

Speaking in Kisumu a fortnight ago, President Kenyatta made the clearest indication of a referendum, saying there is need to relook at the Constitution with a view of making changes to end the “winner-takes-it-all” scenario to boost inclusivity.

He said: “We must relook into the current form of representation and ask ourselves if it is good for us where winner takes it all. If it is not, we find a solution.”

But Mr Ruto, has stated categorically that he would not support calls to expand the executive “to create room for political failures”.

But his opposition to referendum calls seems to be attracting massive opposition from powerful politicians who now seem to be reaching out to each other ahead of the 2022 elections.

Mr Murathe on Wednesday took issue with Mr Ruto for opposing the referendum push even before the Jubilee party takes a position.

“He is going around opposing the referendum. Jubilee is yet to take a position. What is he opposing yet there is no question,” he posed.

Nominated MP Maina Kamanda has boldly come out to defend the remarks made by Jubilee party vice-chairman David Murathe on President Uhuru Kenyatta’s succession in 2022.

Mr Kamanda said Mr Murathe spoke for the silent majority in the party and should not be condemned for stating the truth.

“When the right time comes, we will say the same things Mr Murathe has said but for now let us just focus on the unity of the country,” Mr Kamanda said.

“Let those condemning Mr Murathe stop because what he said is what majority of jubilee party members are saying silently when you speak to them,” Mr Kamanda said.

Yesterday, Tiaty MP William Kamket, an ally of Kanu chairman Gideon Moi confirmed that President Kenyatta, Mr Odinga and Mr Mudavadi would work together for the sake of 2022 elections.

He did not however, disclose their working arrangement.

Cotu Secretary General Francis Atwoli had previously stated that President Kenyatta was “too young to retire in 2022,” thus Mr Kamket’s assertion could be a pointer he may be warming for a position.

Mr Kamket yesterday said pursuant to an expanded executive after a referendum, the leaders would agree on who to take which position.

On the alliance, ODM Secretary General Edwin Sifuna said: “The party will always be ready to forge alliances for the unity of Kenyans”

On the same breath, he however, explained that it was still too early to talk about 2022.

“Right now the singular focus for us is on the building bridges initiative,” said Mr Sifuna.

ODM Director of Elections Junet Mohammed said the party will make their official position on the referendum in the new year.

“Central Kenya voice is Uhuru Kenyatta, no one else. He has not given us any order that we withdraw our support from DP. Uhuru being the beginning and the end of central Kenya politics,” Mr Kang’ata said. He however, noted that talks for alliances were premature.

“Let’s concentrate on food security, providing houses for our people, unveiling universal health coverage and strengthening devolution. We cannot politic for five years. We need ideas on how to fight corruption and not succession,” the Murang’a senator said.

Mr Murathe indicated he was in western to shop for a political partnership and assess the community’s unity ahead of 2022.

Sabatia MP and an ally of Mr Mudavadi, Mr Alfred Agoi welcomed the proposed alliance but called on its proponents to consider picking a presidential candidate from western.

Mr Kabando and Mr Murathe agreed and said they were shopping for a person from the region who would take care of the Mt Kenya interests.

Mr Mudavadi, who seemed happy with the proposed line-up, said he believed the voters in the region had received the message by Mr Murathe.

Mr Mudavadi said he was ready to bring everyone on board.

Nominated MP Godfrey Osotsi, who has been opposed to Mr Mudavadi’s stand, said he was happy that the former deputy premier was picking the right political direction.

“I acknowledge ANC party leader Musalia Mudavadi for his newfound political boldness and encourage him to deepen his political firmness, brevity and consistency if he wants to regain and heighten the trust of Luhyas and Kenyans at large,” said Mr Osotsi.

He added: “Unity of purpose and a common agenda is what will propel our county and entire western region to greater heights.”

By JUSTUS OCHIENG’ and DERRICK LUVEGA

A Kenyan dies in Olathe Kansas