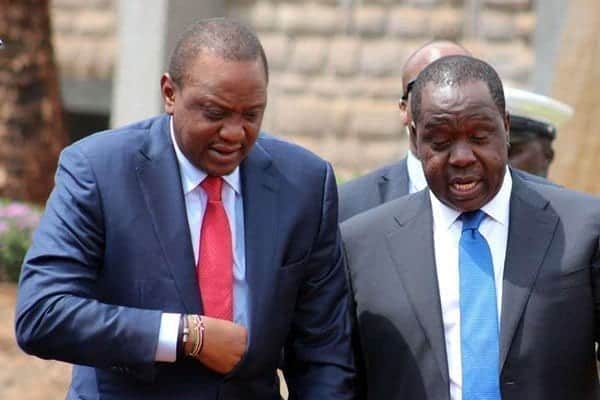 An angry President Uhuru Kenyatta on Wednesday reprimanded the ruling Jubilee Party parliamentary leadership, largely made up of Deputy President William Ruto’s allies, over a perceived intra-party rebellion, interviews with those who attended the meeting in Mombasa revealed on Thursday.

Sources said the team had planned to broach the subject of the health of the ruling party amid fears of an implosion, only to be met with the tough talk that they were not toeing the party line, and should do so henceforth.

Dr Ruto, sources said, was in the room when the President read the riot act to the party leaders.

That surprise move by the President was compounded by talk within his inner circle of the formation of the post of Parliamentary Secretary.

The holder of the office, preferably a former MP, will be at the level of Cabinet secretary and will link the Executive to Parliament — an arrangement seen as a plan to tame Aden Duale and Kipchumba Murkomen, Parliament’s majority leaders.

Former Jubilee interim vice-chairman David Murathe, who quit his post to focus on a “Stop Ruto” movement, has on several occasions criticised the House leadership for what he feels is an anti-Jubilee stance.

“We cannot have a situation where our party leadership in Parliament is opposing the government. When you start threatening that you will go against the government, what you are doing is actually casting aspersions on the judgement of the President,” Mr Murathe said of the House leadership in August last year.

The Ruto camp now sees that comment as the start of a targeted campaign against him.

With all Jubilee parliamentary leaders, save for National Assembly Speaker Justin Muturi and nominated MP Cecily Mbarire, leaning towards Dr Ruto, there have been several cases of the House leadership appearing to antagonise the Executive.

Revelations of the Mombasa meeting came just two days after President Kenyatta re-organised his government and made Interior Cabinet Secretary Fred Matiang’i in charge of a committee comprising his Cabinet colleagues to supervise and inspect the implementation of government projects, a distinct feature of Dr Ruto’s tenure as DP in the last six years.

While this has irked the Deputy President’s allies, who had on Wednesday demanded clarity on his role, politicians close to Dr Ruto were on Thursday unusually forceful in their refusal to discuss the Matiang’i-led committee, reports of President Kenyatta reading the riot act to the party parliamentary leadership, as well as the floating of the parliamentary secretary option.

“Things are bad,” a top Jubilee politician allied to the DP told the Nation.

Officially, the Mombasa meeting was called to discuss the party legislative agenda, and secretary-general Raphael Tuju yesterday said that was all that transpired.

“Kenyans are very interesting people; they view their politicians as gladiators tearing each other in arenas. They demand to see blood, and when none is forthcoming, like was the case during the Mombasa meeting, they get disappointed,” Mr Tuju said, dismissing talk of a stormy meeting at the coastal city.

But another member of the party who attended the meeting said it was meant to restore harmony in the party.

“We should be reading from the same script. The President is focused on his legacy and wants to make sure that he delivers on his Big Four agenda,” he said.

Dr Ruto met Pentecostal Evangelistic Fellowship of Africa (Pefa) pastors at his Karen office in Nairobi, the third group of religious leaders to visit him in less than two weeks.

He waded into the debate over the effect of the elevation of Dr Matiang’i, saying all was well within government and the appointment had not whittled down his powers at all.

“Government officers at all levels should align their operations to the order issued by the President,” Dr Ruto said in a tweet, his first comment on the order.

Yesterday, the Nation also learnt that a retreat that had been planned for next week at Amboseli National Park, mooted by the Ruto camp following Mr Murathe’s resignation, had been called off “because the timing is just not right”, according to a party insider.

It had been called to develop a strategy on how to deal with the friendly fire against Dr Ruto’s bid to succeed President Kenyatta in 2022, especially after Mr Murathe said the DP will not be the party’s automatic candidate in 2022.

The Nation has also established that after the order elevating Dr Matiang’i was released, MPs allied to Dr Ruto discussed how best to react to the tension it created.

“The popular feeling was that the group should issue a formal statement denouncing the order as an affront on Dr Ruto,” an MP in the camp, who did not want to be named, told the Nation.

“Our slogan in the 2017 General Election was “Tuko Pamoja (We Are Together)”. Clearly, from what is happening, that is no longer the case and we must ask the hard questions.”

Lawyers within the camp were asked to go through the order and determine its legality and the remedies available should they find that the President had violated the Constitution.

After deliberations, they returned a no-guilty verdict on the President.

The lawyers told the group that, while they could make a political statement on the Executive Order, the legal argument that suggested the President had erred was a non-starter as it lacked a basis.

It was at this point that Dr Ruto reached out to some politicians from the Rift Valley who had scheduled a press conference at Boulevard Hotel on Wednesday and asked them to shelve it.

“In the absence of the legal argument, people close to the DP resolved that making a political statement would only strain the relationship between the President and his Deputy,” the MP said.
-nation.co.ke