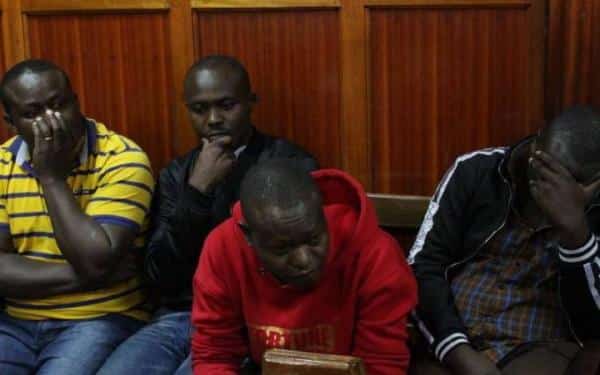 The seven men accused of impersonating President Uhuru Kenyatta are out on Sh200,000 bond each.

Milimani Senior Principal Magistrate Peter Ooko heard that Sameer Africa Chairman Naushad Merali got a call from telephone number 0722 208842 and the caller identified himself as President Uhuru Kenyatta. The caller had the same voice and tenor as the President.Corporal James Mwangi said the caller wanted the Sameer chairman to give facilitation fees so that ‘State House’ could assist in the purchase of a piece of land.Mr Merali was not in the country so he directed Sameer Africa Finance Director Akif Hamid Butt to process the money, not knowing that the caller was duping him.The court heard that Mr Butt was told that the money he was to wire was to buy land in Milimani, Nairobi County.The suspects gave the number of an Equity Bank account into which he wired Sh10 million.  “The complainant (Butt) was contacted by fraudsters using several telephone numbers purportedly from President Uhuru Kenyatta. The complainant realised he had been dealing with fraudsters after he had lost his Sh10 million,” said Mr Mwangi.

According to court papers, investigators were seeking to establish whether the con game had other players, including State House staff. Police asked the magistrate to allow the seven suspects, who were arrested on February 22-23 of this month, to be detained in a bid to get information on who else was in the plot to obtain money by false pretences.“Due to the complexity of the investigations and the number of suspects involved, including some who are still at large, it is expected that the investigation will involve going through voluminous documents, including bank documents and call data records analysis,” said Mwangi.“The nature of investigations is complex since it requires communication data from several service providers, which requires time.”Police have seized a Toyota Land Cruiser, a Toyota Mark X, a Toyota Axio and a Toyota Crown in connection with the syndicate.

Struggle That Ensued Before Ida’s Bodyguard Barrack Otieno Was Shot