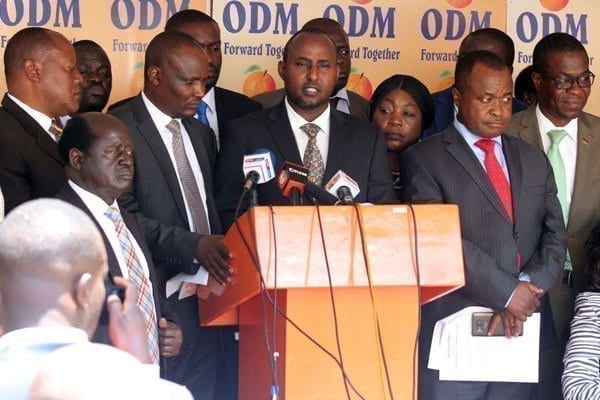 “The party arrived at this decision following consultations with the top leadership of Jubilee Party, during which we agreed to reciprocate Jubilee’s earlier decision to withdraw from the Migori, Ugenya and Embakasi South by-elections,” Mr Mohamed said in a statement.

“Just as Jubilee did in the three recent by-elections, ODM will not take sides in the contest in Wajir West. We wish victory to the best candidate.”

ODM had named Mohamed Yusuf as the candidate who would face politicians including Jubilee’s Mohamed Kolosh.

The orange party suffered unexpected losses in Ugenya and Embakasi south, which led Mr Mohamed and Director of Political Affairs Opiyo Wandayi to say that its strategies would be reviewed.

Mr Wandayi said the party was unshaken by the losses but admitted that changes needed to be made to prevent such outcomes in the future.

Political pundits were of the view that the outcomes of the polls were an indicator of an emerging politically mature electorate and what to expect in future elections.

Both elections were peaceful and voters exercised sobriety and tolerance even after the results were announced.

Mr Odinga downplayed the loss, asking “what’s the big deal” and describing it as a “drop in the ocean”.

Equally defiant was the party’s Secretary-General Edwin Sifuna, who told affiliates of the National Super Alliance to brace themselves for more political fights.

“Wiper has won this one but they can rest assured we will have more battles in future,” Mr Sifuna said of the Embakasi by-election.

SEE RUTO TAKE MALINDI BY A STORM A DAY AFTER DEFEATING ODM IN THEIR STRONGHOLDS!!

Behold the Apocalypse? Jerusalem Becomes the Capital of Israel