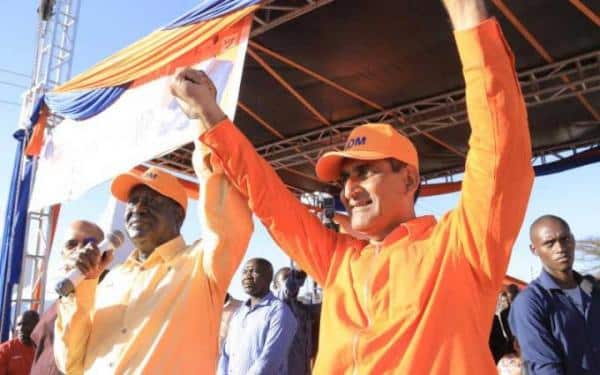 Opposition leader Raila Odinga’s ODM party had a plan – to upstage their coalition partner Wiper and wrest from its pouch the only parliamentary seat they have in Nairobi.

In Ugenya, they had one job – to retain the parliamentary seat. ODM rewarded Irshad Sumra and Chris Karan with direct tickets for the by-elections in Embakasi South and Ugenya constituencies respectively.On January 2, ODM Secretary General Edwin Sifuna said they would humiliate NASA affiliate parties’ candidates. They have, however, lost both the just-concluded by-elections.It is the first time ODM candidates have lost a by-election in recent times occasioned by discredited polls. But this is no surprise.Many foresaw the defeat following Raila’s truce with Uhuru Kenyatta in the hyped March 9 Handshake at Harambee House, Nairobi.The rapport did not only cool political temperature in the country, but also opened fissures in the previously tight opposition coalition.NASA affiliate parties such as Wiper felt left out from the deal.

Ford Kenya in a congratulatory message to Mawathe after the win said: “As Ford Kenya Party, we joined our Wiper brothers and other well-meaning parties to drum support for Julius Mawathe’s candidature in the spirit of NASA”.The situation was no different in Ugenya, where David Ochieng of Movement for Democracy and Growth (MDG) beat ODM’s Chris Karan by 18,730 votes to 14,507 votes.

On March 3, Raila asked Ugenya residents not to embarrass him and back Karan.In what seemed like a post-Handshake deal, Raila said President Uhuru Kenyatta’s party did not field a candidate for both the races to favour ODM.Speaking during the funeral of Nairobi Kaloleni former Senior Chief Daudi Owino, Raila said it would be embarrassing to lose the seats.”Because of the unity and the spirit of working together, the President did not field a candidate in Ugenya and Embakasi by-elections.

What will it look like if someone else got the seat he left for me? I urge you to commit and vote for my candidate, ” he said.A section of Jubilee leaders, however, declared support for Mawathe.Gatundu South MP Moses Kuria, Embakasi West MP George Theuri, Charles Njagua (Starehe), Makali Mulu (Kitui Central) and Simon Mbugua (Eala) said they would ensure Mawathe won.Deputy William Ruto, who has been quoted saying the Handshake between Uhuru and Raila is meant to curtail his 2022 presidential ambitions, took to Twitter to congratulate both Mawathe and David Ochieng.“CONGRATULATIONS Ochieng (Ugenya) & Mawathe (Embakasi) for your God given victory. Jameni wacheni MUNGU aitwe MUNGU. The hustler nation has spoken, the people have decided. GLORY TO THE ALMIGHTY GOD,” he said.Going by the discord in ODM and NASA, it is not far to call that the previous grip Raila had on his perceived strongholds is loosening.

The College of Business is the epicenter of careers

Inspiration:”Why God chooses to use the dead”

I am taking a back seat from politics to rest, says Karua