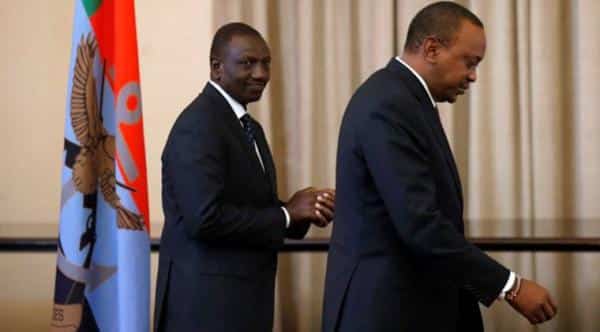 Tension as Uhuru, Ruto trade indirect stabs: That the once memorable bromance between President Uhuru Kenyatta and his deputy William Ruto is no longer blossoming, is no secret.

Happy moments have now been replaced with tonnes of unease and simmering tension.

President Kenyatta and his deputy Ruto seemingly making indirect stabs at each other as they addressed the gathering at the national prayer breakfast on Thursday.

As President Kenyatta urged leaders to practice what they preached, his deputy on the other hand was rallying the hustler republic to his corner.

Dr. Ruto terming the meeting an opportunity for leaders to speak candidly and pray together but for President Kenyatta, he was done with talk and zero action.

“ We love talking about it, making our commitments, but the practical side, a bit tough…we can sing from the roof tops but all our people want is for us to do what we have said…,” said President Kenyatta.

For months there has been a reported cold war between the two, while President Kenyatta is fighting to secure his legacy, there is a general feeling that Ruto’s bid to ascend to power in 2022 is causing a distraction through campaigns.

“ If only just for a moment we could all just stop talking a little and practice what we said today, Kenya will be a different country in less than five years…,” said President Kenyatta.

In pure dr. Ruto fashion, the self-proclaimed hustler seemingly launching his bid as he appealed to fellow hustlers.

He would also tell his tale from rags to riches

“My father bought me a shoe for Ksh.60, today the gentleman is sitting on the high table with the son of the founding father…,” said Ruto.

The DP taking aim at those questioning his contributions to the church said : “ Some of us have a lot more to be thankful for than some of you…,”.