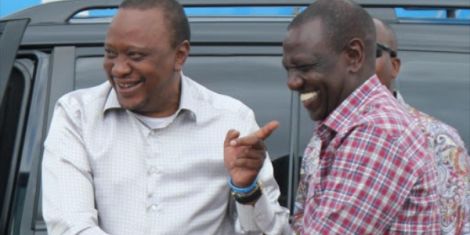 President Uhuru Kenyatta and his deputy William Ruto are set to get a pay rise of 3.9 per cent.

Quoting documents from the Treasury, Business Daily reported that with the increase, the combined annual basic salaries of the two will increase from the current Ksh36.6 million to Ksh38 million.

The paper further detailed that according to the budget, the duo would enjoy a combined allowance package of Ksh15.2 million while the salary would be Ksh22.8 million expected to take effect starting June this year.

This comes nearly two years after Uhuru and Ruto, together with other public officials, took the 3.9 per cent pay cut in months leading to 2017 General Election in an attempt to curb the ballooning wage bill.

At the time, President Uhuru’s salary dropped from Ksh1.65 million to Ksh1.44 million while Ruto settled for Ksh1.23 million from Ksh1.4 million.

Commenting about the matter, Kikuyu MP Kimani Ichung’wah, who chairs the Parliamentary Budget and Allocation Committee, revealed that the new figures were to be tabled in the National Assembly this week.

“I have not seen the estimates, they are going to be tabled this week,” he stated on phone.

This comes at a time when the Treasury is struggling to raise money for development and essential services such as security, health and education.

So dire was the situation that the Treasury was forced to review its budget following mixed tax collections.

With the tax increase, however, the next financial year will not be the one in which Uhuru and Ruto will earn the highest salaries and allowances. In the year ending June 2017, they pocketed Ksh51.2 million.