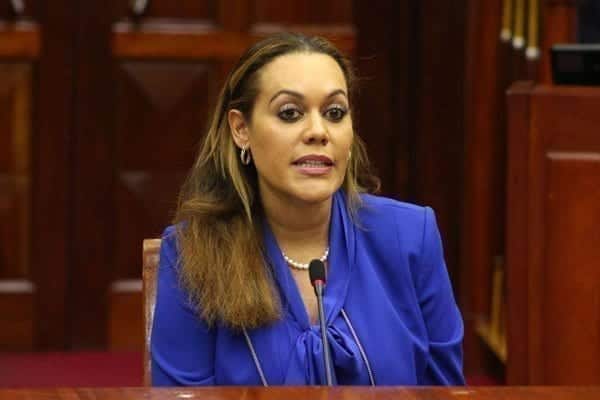 Diaspora Mwende Mwinzi: A heated debate in the National Assembly on Thursday culminated in the approval of seven individuals nominated as High Commissioners, paving the way for their formal appointment by President Uhuru Kenyatta.

The nomination of Ms Mwinzi, who has dual citizenship (Kenya and US), drew the most attention while the other nominees sailed through without being mentioned by members.

Prior to the debate and while quoting the ruling of the Court of Appeal, lawmakers guided by Speaker Justin Muturi resolved that a public officer is also a state officer and must never hold dual citizenship.

Upon appointment, an individual must renounce their second citizenship before taking up the job.

Ms Mwinzi thus has to renounce her US citizenship after formal appointment so that she does not break the law.

The report by the Defence and Foreign Relations Committee, that was tabled in the House on Tuesday, recommended that Ms Mwinzi choose between her US citizenship and the Kenyan job.

Committee chair Katoo Ole Metito (Kajiado South) said, “Dual citizenship has consequences. We are not saying she cannot take up the position as an ambassador. We are saying she can renounce the position if the House approves her name.”

“There is nobody denying Mwende Mwinzi a job but she must follow the law and Constitution. She must comply with the provisions of the Leadership and Integrity Act,” Mr Duale said.

“If the US President tweets saying all its citizens should leave South Korea, what will Ms Mwinzi do?”

Envoys fall in the category of public officers, whom article 52 of the Act also categorises as state officers. The law says they must not hold dual citizenship.

Mr Duale said: “Take the moral high ground; renounce that dual citizenship. It is not going to help you. The anti-corruption commission should do a forensic audit of all Kenyans serving in public positions, who hold dual citizenship.”

The majority leader also asked the Directorate of Criminal Investigation (DCI) and the Director of Public Prosecution (DPP) to investigate any ambassador or High Commissioner who has dual citizenship for breach of law.

Minority leader John Mbadi (Suba South), while supporting the report, noted that it was within the law to ask Ms Mwinzi to relinquish the US citizenship.

“We, in this House, have been criticised for approving people with questionable characters. If you don’t renounce the US citizen you will remain as one. Asking her to renounce her citizenship is not asking too much,” he said.

Article 78 (2) of the Constitution on citizenship and leadership says a State officer shall not hold dual citizenship.