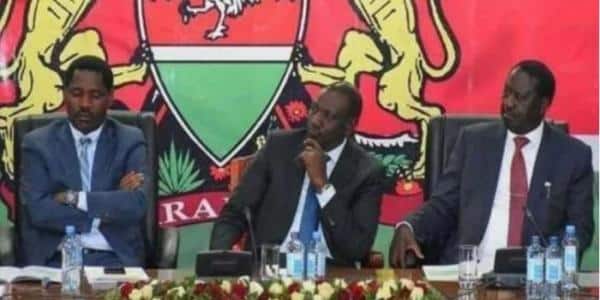 The picture captured an awkward moment where the DP Ruto was sandwiched by his two supposed political rivals.

They met on Monday during the official opening of the Kenya Trade Week and Expo 2019, at Kenyatta International Convention Centre, Nairobi.

Ruto has on numerous occasions accused Odinga of seeking to destroy Jubilee Party, especially after the handshake on March 9, 2018.

On the other hand, Munya has received scathing attacks by Ruto over his alleged involvement in plans to assassinate the deputy president.

With all this in mind, a keen Facebook user by the name John Riaga was moved by the number of water bottles placed before each leader at the forum.

On the far left, Munya had one bottle, DP Ruto in the centre had two and Odinga on the right had three bottles.

Riaga shared his observation on his Facebook account and Kenyans did not fail to come up with an analysis on why the number of bottles varied.

A user by the name Sharon Gerald laughed out at the observation but noted the tension between the three.

“Ahahahahaha… Kumbe it’s that serious?! Mpaka maji? (You mean it’s this serious, that they have to drink different numbers of bottled water?)

Below are photos showing Kenyans analysis on the same: