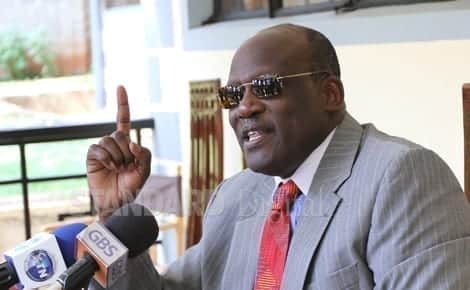 Addressing residents at a funeral ceremony at the weekend in Tala, the outspoken politician claimed it was clear both President Kenyatta and Mr Odinga had vested interests in the proposed amendment to law which creates the position of a powerful Prime Minister and a ceremonial President.“

I can say here without fear of contradiction that what Uhuru and Raila are pushing for is aimed at creating positions of Prime Minister and President for none other than themselves and if that is the route they want to take this country, I am telling them that it will not be fair to Kenyans,” said Muthama.

Muthama warned that any effort to amend the Constitution aimed at creating positions for few individuals will be an exercise in futility. “If they want political stability in the country arising from inclusion in Government, let them create 45 positions to ensure all communities enjoy representation in Government.

I will carefully gauge the proposed law and I will be proud to make history as having rejected an amendment to the constitution which was of no help to Kenyans,” he said.Muthama alleged that it was the persistent clamor and crusade for such constitutional amendment which had led to the split in Jubilee Government leading to Tangatanga and Kieleweke factions.

“The country is now split down the middle which is why Tangatanga and Kieleweke factions have emerged. Kenyans have linked Tangatanga to Deputy President William Ruto while Kieleweke has been associated with Uhuru and Raila and as Kenyans we are saying we do not want to witness such divisions,” Muthama said.

I Believe In Miracles: A Testimony Of Hope After Son Was Shot 3 Times