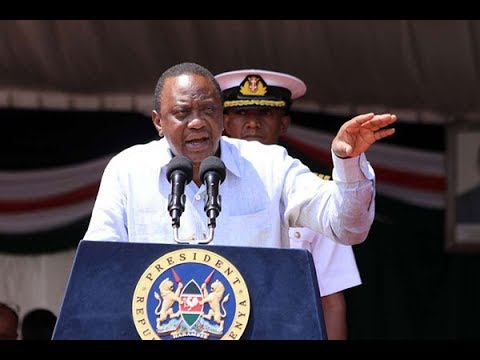 VIDEO: Uhuru hints he may not Endorse DP Ruto in 2022

VIDEO: Uhuru hints he may not Endorse DP Ruto in 2022- President Uhuru Kenyatta dropped the clearest hint that he may not back his deputy in the 2022 General Election.

Speaking in Ruiru, Kiambu County, where he opened a Sh20 billion Bidco Industrial Park, Mr Kenyatta said it is God who will determine who becomes President so leaders should stop getting agitated and instead serve Kenyans.

He said he is not aware who will be the next president because it is God who ordains a leader.

This is seen as a stinging rebuke on Deputy President William Ruto who has been criss-crossing the country popularising his bid with his foot soldiers saying President Kenyatta should honour his 2013 pledge that he will back the DP.

Dr Ruto’s camp has been getting impatient with the President for his lack of clarity on who he will support.

On Wednesday, Kapseret MP and a close Ruto ally Oscar Sudi urged President Kenyatta to resign, calling him the worst the country has ever had.

Addressing the press at his Kapseret home in Uasin Gishu County, Mr Sudi dared the president to give him only three months and he will run the country better than he is doing.