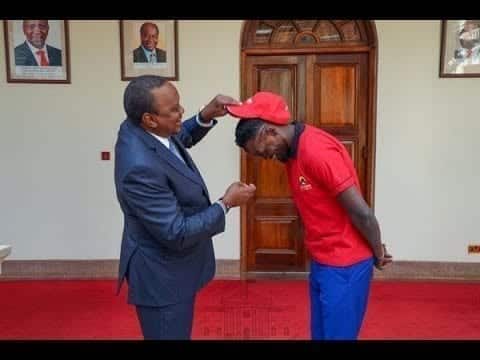 Coming days to the release of the Building Bridges Initiative (BBI) report, politicians in the two camps are in a hurry to downplay the move.

While some contend that Kenya’s democracy has matured, others say BBI will shape the country’s future for years to come and therefore the Kibra contest is too small a thing to rock the ‘handshake’.

However, there are those who believe the President’s endorsement of a Jubilee candidate in an ODM stronghold was “strange” and does not augur well for the unity deal between him and Mr Odinga.

But even though the top leadership of ODM and Jubilee maintain that all is well, behind the scenes, Mr Odinga’s camp feels betrayed.

A source within the ODM party told the Nation that all along they had seen Deputy President William Ruto as the sole senior Jubilee leader fronting Mr Mariga until Wednesday evening when the President threw his weight behind the football star’s candidature.

“Even on Wednesday when photos of the President receiving the Jubilee team at State House were shared on its social media pages, the first team to circulate them was the DP’s team in a bid to tell Kenyans that Mr Kenyatta was in the whole mix while we know how the DP desperately pushed for the Wednesday meeting,” the source said.

Jubilee secretary-general Raphael Tuju Thursday denied claims Mr Mariga’s candidature would have a negative impact on the ‘handshake’ but fell short of denying that the President would take part in the campaigns.

When questioned on whether the President will campaign in Kibra, Mr Tuju said: “That has not been discussed thus commenting on that will be speculation.”

Even as the President endorsed Mr Mariga, the Nation established how the DP’s team spent hours at Sagret Hotel waiting for him to join his convoy to State House.

“At first they went there but were denied entry since the Head of State had a busy schedule with his Rwandese counterpart who attended the OATTU event. When they got the slightest chance, they dwelt on a photo session and it is understood there was no single meeting to discuss the road map for the campaigns,” a source privy to the meeting revealed.

Mr Tuju said Wednesday’s courtesy call at State House was the first time President Kenyatta was getting involved with Kibra by-election politics as he has been spending much of his time concentrating on matters affecting the whole country.

“The President is very busy on very many things affecting the country but we are in touch as a party, not on politics but on development. Politics of Kibra or the party is a very small part of our engagement. The longest time we spent on politics this month is the few minutes we were in State House with Mariga,” said Mr Tuju.

He maintains the meeting was just a courtesy call and an opportunity for a photo session with the Head of State as the party normally does with its candidates before any by-election.

Mr Tuju said the delegation was led by Dr Ruto and himself as the party secretary-general accompanied by party leadership in Parliament led by Mr Aden Duale and Mr Benjamin Washiali.

“It was a courtesy call and not a party meeting where we discussed detailed party issues. So do not try to read more into it. We had the same with Wajir West MP Ahmed Kolosh before the area’s mini poll where the President received him and gave him a hat and that was it. We cannot censure speculations as we have the freedom of thought and speech,” he said.

Mr Tuju denied that Mr Mariga’s endorsement will have any negative impact on ‘handshake’ and BBI.

“It is clear that the BBI and ‘handshake’ is not about 2022 but about a much bigger agenda than just one constituency,” Mr Tuju said, adding that the party’s withdrawal from Ugenya and Embakasi South by-elections in April should not be used to portray that the ‘handshake’ was in danger.

“We are pragmatic and don’t be surprised when in the next one we withdraw. God forbid. We discuss each constituency case by case rather than as a policy position.”

ODM director of elections Junet Mohammed also reiterated that the President’s endorsement of Mr Mariga has nothing to do with the ‘handshake’.

“For a fact, Uhuru is the party leader of Jubilee and Raila of ODM and they have a right to make decisions on behalf of their parties separately.

“They did not relinquish their positions after the ‘handshake’ or forming the BBI. So the endorsement has very little impact both on the BBI and ‘handshake’. It is inconsequential.”

Mr Mohammed, however, warned Jubilee to be prepared for an embarrassing defeat.

“They will be ashamed very soon, on November 7 … They will have nowhere to hide their faces by November 8,” Mr Mohammed stated.

Nandi Senator Samson Cherargei said there should be no fears of Mr Mariga’s candidature threatening the ‘handshake’ “if at all it was a genuine deal”.

“President Kenyatta is the Jubilee party leader and he has a role in our party hence his endorsement is normal and part of his role as a Jubilee leader.”

Jubilee deputy secretary-general Caleb Kositany said: “I have always said the ‘handshake’ was never about Jubilee not fielding candidates against ODM. Mariga’s endorsement by HE is a clear sign that our democracy has come of age and that the ‘handshake’ has indeed achieved the political peace it was meant to. It should not affect the BBI or the handshake.”

Kimilili MP Didmus Barasa said they would support Mr Mariga regardless of the underlying issues.

“In fact, Jubilee members who are against this quest should be disciplined for going against the Political Parties Act.”

ODM secretary-general Edwin Sifuna said there is no reason to fear as none of the nine-point agenda of the ‘handshake’ had anything to do with not fielding candidates or support for each other’s political parties.

“The handshake and its agenda was reduced to a nine-point written memorandum. In Kibra the agenda is simple. To find a person who can represent the people of Kibra in Parliament and continue the good work the late Ken Okoth had started. Those who want to make it about handshake, BBI, tribes or 2022 are desperate,” said Mr Sifuna.

Political analyst Javas Bigambo said the ‘handshake’ was not a merger of political parties. “The decision by Jubilee not to field in Ugenya was maybe that they did not see any chance of a possible victory, or just a question of a gentleman’s understanding.”

Political analyst Herman Manyora says the declaration is no big deal. “There is a lot surrounding Mariga’s candidature that should have made President Kenyatta avoid receiving him at State House rather than the handshake,” Mr Manyora said.

Opening the Will: Heirs to Cohen’s wealth to be known today

Kenya fights off pain of isolation and cold war by Magufuli

Amazing Photos: Lions cause traffic jam in Nairobi as they lie down in the middle of…

Can Uhuru Become Our Messiah In The Fight Against Corruption?