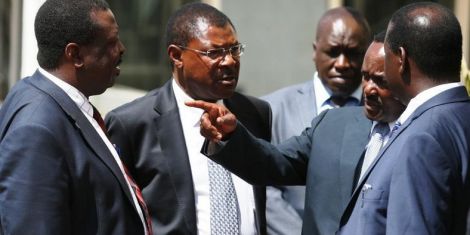 On Thursday, October 3, Registrar of Political Parties, Anne Nderitu, ruled that the coalition agreement signed by NASA affiliate parties did not contain any clause stipulating sharing funds from the Exchequer as reported by The Standard.

ODM, Wiper, Amani National Congress (ANC) and Ford Kenya had submitted the agreement ahead of the 2017 General Election.

“When dealing with coalitions, we go by what the parties agreed in the MoU.

If it gives a formula of sharing of funds, then we go with that,” Nderitu stated.

She also argued that in case such a clause was non-existent, they had to depend on the Political Parties Act, which stipulates the requirement for a political party to benefit from public funding.

“In this particular case, the MoU did not stipulate such a formula and, therefore, we cannot enforce the sharing of the funds. We go by what the Act provides,” Nderitu stated.

For a political outfit to benefit from public funding, it must have at least 5 per cent of the total vote in tallies for the President, members of Parliament, governors and members of county assemblies in the last General Election.

Jubilee Party and ODM are the only political parties that meet this requirement. They are, therefore, the only parties entitled to the funding.

In July 2019, NASA affiliate parties Wiper, ANC, and Ford-Kenya waged a war against ODM after the Raila Odinga-led party maintained that it does not owe them a cent in Ksh4.1 billion pay from the Exchequer.

The three parties led by co-principals Kalonzo Musyoka, Musalia Mudavadi and Moses Wetangula later met to agree on how the billions awarded to ODM should be shared after the four parties failed to agree on the sharing formula in a meeting chaired by the Registrar of Political Parties.

“The clause is available, maybe the registrar did not see it. However, we will pursue the matter in an amicable way. We won’t shout and argue in public. We also have an arbitration method which will enable us to solve the issue,” ANC spokesperson, Barrack Muluka informed Kenyans.co.ke newsroom.

The party leaders have also been embroiled in a bitter war over the handshake. Mudavadi claimed that Odinga rushed to President Uhuru Kenyatta after the principal’s family was threatened with VISA cancellation.

While addressing the press, ODM’s secretary-general Edwin Sifuna firmly rejected claims that the proverbial handshake between Raila Odinga and President Uhuru Kenyatta was as a result of blackmail from the International community.