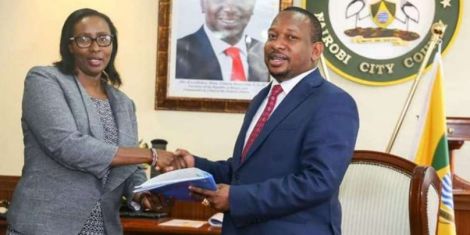 Secrets Revealed: Sonko’s Hand in Elachi’s Dramatic Comeback: The dramatic return of embattled Nairobi County speaker Beatrice Elachi took intricate planning and execution after being out for over a year.

The Daily Nation of Thursday, October 9, 2019, that a series of meetings between ODM and Jubilee ward reps culminated in what was witnessed at City Hall.

The discussions which had the blessings of Nairobi Governor Mike Sonko were privy to only a few MCAs.

“The mother of all the meetings happened on Sunday last week where the final touches on how Ms Elachi would resume office,” the newspaper published.

The return of Elachi was coupled with the ouster of former Nairobi County Assembly Majority Leader Abdi Guyo who had helped plot her impeachment in 2018.

A letter by Sonko had suggested that Guyo was to be replaced by Maringo Hamza MCA Mark Ndung’u who led the other legislators in planning for the return of Elachi.

The letter dated October 4 disclosed that the governor despised Guyo’s antics of undermining his leadership making it difficult for him to work in the county.

“Consequently I am forwarding to you the name of Mark Ndung’u as the new majority leader designate. Kindly effect appropriately,” the letter addressed to Elachi and Jubilee Secretary-General Raphael Tuju read.

Guyo and Minority Whip Peter Imwatok had led MCAs in criticising the governor over frequent suspensions, claiming that he was interfering with roles in the County Public Service Board.

Elachi’s comeback was filled with goons that were publicly shouting their allegiance to the governor while at the same time, accusing Matopeni MCA Guyo of causing a rift in the county.

“Guyo respect the governor. You will know who this Nairobi belongs to,” they shouted.

Elachi, however, maintained that the governor did not have a hand in her return. She divulged that the constant insults she had received from Guyo prompted her return to office.