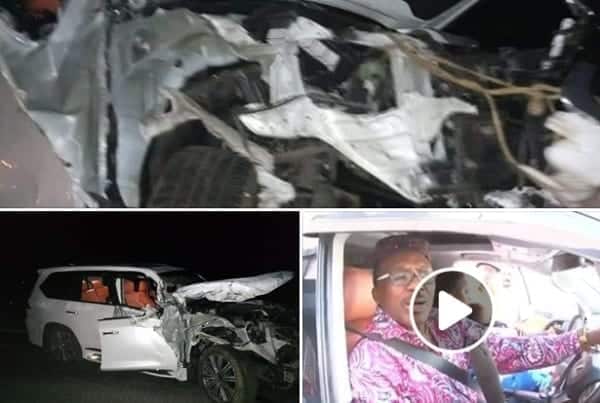 Neno Evangelism Pastor James Ng’ang’a has reacted to rumours going around that he recently went into hiding after his two-week-old swanky car was involved in an accident along Namanga Road.

It was reported that the pastor vanished into thin air after the vehicle, a Lexus LX 570 model, was involved in the accident on Friday, November 27.

Speaking to a local news outlet, the controversial pastor dismissed the claims saying he was not at the scene of the accident.

The man of the cloth, however, neither denied or confirmed that the vehicle estimated to cost around Ksh10 million is his.

He stated that whoever wants to know his whereabouts can reach him through his phone number.

Ng’ang’a added that if anyone cared to know if he was the owner of the vehicle they can also easily run a search on the National Transport And Safety Authority (NTSA) website using its number plate.

“I don’t know why people have so many stories about me. I was not there. Even if I bought the car, I hear it has hit a lorry that was parked somewhere, but I was not there. I can’t hide and if anyone wants to know where I am, just search for my number,” he is quoted by the Star.

“I’m not hiding. Watu waangalie number plate ya gari wajue kama ni yangu. I have my cars, hotel and currently, I am building a prayer house in Jerusalem. That’s where I have been going. Ati wanasema najificha.”

The pastor, not a man to shy away from limelight, maintained that being a public figure he is not bothered with what people write about him online.

“I’m in the same category with DP Ruto and I don’t want my name to be clean, you call me controversial. Nilikohoa mkaitika,” he said.

If the accident reports are anything to go by, this is not the first incident involving Ng’ang’a that has been surrounded by controversy.

In 2015 he was involved in an accident which left one dead at Limuru. He was, however, acquitted of the charge of careless driving.

The defence counsel argued that Ng’ang’a was not on the wheel and was not present at the time of the accident.

This contradicted reports by witnesses and onlookers who narrated that he was present and was ferried away from the scene, treated at the Karen Hospital and allowed to go home after he refused to be admitted.