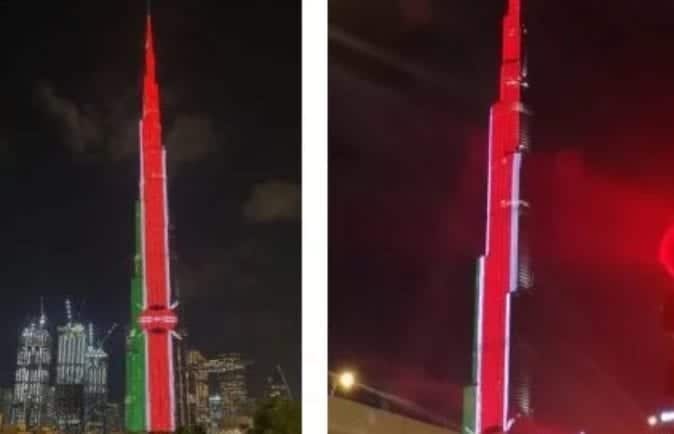 Kenyans on Twitter were uncontrollable on Thursday night after photos emerged showing the Kenyan flag being beamed onto the world’s tallest building, Burj Khalifa, in United Arabs Emirates.

beaming the Kenyan flag on its 828 metre height while others were left questioning the cost of the display.

Photos and videos of the mall with a total height of 829.8 metres and a roof height of 828 metres made rounds showing the Burj decorated with the Kenyan flag causing excitement among Kenyans on social media.

In the video, the Kenyan flag can be seen rotating from the top to the bottom as elated tourists watched.

The display happened on December 12, 2019 when Kenyans were celebrating Jamhuri Day.

Ecstatic Kenyans couldn’t believe the tallest building in the world with a record 163 floors and 2 subterranean levels in parking took its time to honor Kenya’s 55 years of independence.

The entire Burj Khalifa was lit with the Kenyan flag in celebration of the day the country gained its independence just the way it lit for the Ugandan Independence Day in October 2019.

The cost to place a promotional advert or message on the façade of the Burj Khalifa starts from Sh7 million (AED250,000) for the three minutes during weekdays from 8pm to 10pm, rising to Sh9.6 million (AED350,000) on weekends.

In his Jamhuri Day speech, President Uhuru Kenyatta vowed to continue with the fight against corruption.

It is unclear whether Kenya paid for the display or it was Dubai’s way of celebrating Kenya, which has a huge number of visitors and workers in the flashy Emirate.

Here is a sample of reactions by Kenyans on twitter to the Jamhuri Day spectacle: