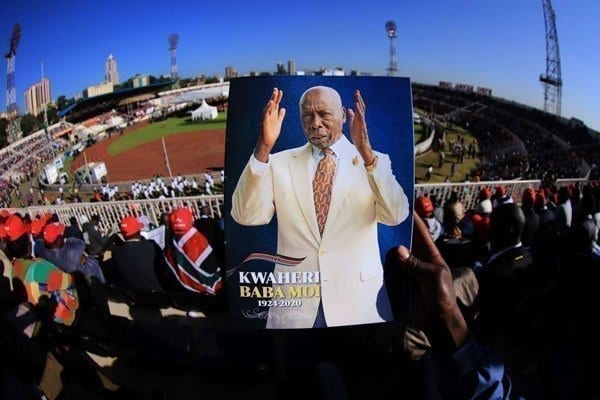 The funeral, which will be held at Moi’s home in Kabarak on Wednesday, will include family members, close friends, prominent leaders and members of the public from Nakuru and Baringo counties.

The ceremony will begin at 8am with a funeral procession at his home, where preparations for the funeral have been taking place for the past one week and are expected to be done by the afternoon.

During the funeral, tributes will be made by close family members, with the children and grandchildren taking turns to pay their last respects through eulogies and poems.

The first reading of the Bible will be done by grandchildren Kimoi Moi and Talissa Moi while the second reading will be by son Hosea Moi and Paula Jepkemboi.

Mourners at Daniel Arap Moi’s funeral to get free soda…

Thereafter, an hour will be dedicated for tributes before Moi is laid to rest next to his wife, Lena, who died in 2004.

Some of the hymns that will be sung include ”Forever with the Lord”, ”It is well with my soul”, and ”Cha Kutumaini Sina”.

Last week, a section of Baringo residents called on the government to take Moi’s body to Kabarnet for public viewing before he is buried. Moi was the MP for Baringo North and Central for a cumulative 39 years.

This is the second State funeral with full civilian and military ceremonial honours and will largely mirror that of Kenya’s founding President Mzee Jomo Kenyatta.

The full military honours include being escorted in a gun carriage, accompanied by military musical honours and a 19 gun-salute.