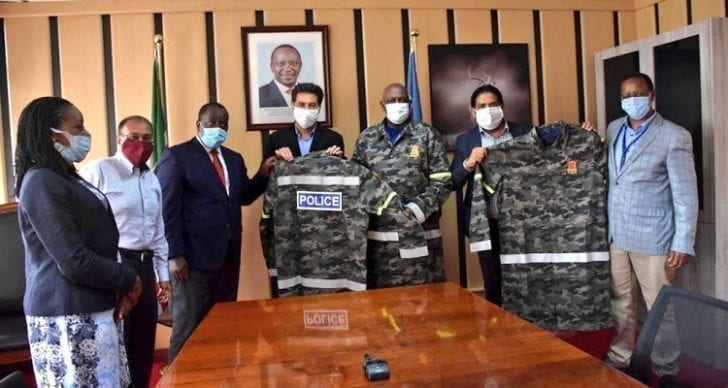 The government is not backing down on local sourcing of materials and production of goods, Interior CS Fred Matiang’i has said.

The CS made the announcement at his Harambee House office after receiving a donation of jungle green police jackets from Sachen Gudka, chairperson, Kenya Association of Manufacturers and Pankaj Debi, chairperson, United Aryan Limited.

“We have led from the front and we are going to continue. A while ago, our overall coats used to be imported from China but never again. These coats are locally made and they are warm enough. So, all coats, gear and even boots for the National Police Service will be made locally so that we continue promoting businesses and creating employment in the country,” the CS said.

The CS added that the state is determined and serious about improving the economy by no longer allowing the exportation of jobs to other countries.

He alluded to the handwashing stations, masks and sanitizers that have been donated and subsequently deployed by private sector players to police stations all over the country due to the Covid-19 pandemic.

“To successfully enhance welfare and security, it’s always a partnership between private citizens and the security system. I am happy that people have learnt to say thank you to local security personnel. I was so impressed by those women in Tala who were cooking for our police officers manning the roadblock in that area,” he said.

To continue protecting local manufacturers, Matiang’i reiterated that the government will not back down in the fight against contraband goods.

“These days, we have taken very ruthless measures. Whenever we arrest trucks with contraband goods like sugar, the illegal seizures are destroyed immediately. Because that is how we can protect our local industry.”

“Protecting Kenyan jobs and Kenyan businesses is now a national security issue. We can longer have our businesses go south,” he added.

Interior PS Karanja Kibicho, said that the National Youth Service (NYS), who were originally given exclusive rights to source for the local fabric and knit the police uniforms in Ruaraka, will be helped out by the private sector in order to speed up the process.