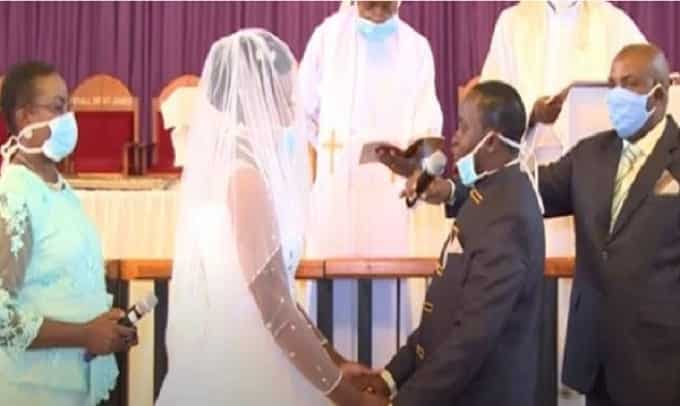 Despite the numerous disruptions caused by the Coronavirus pandemic, Kennedy Mureithi and Pauline Waithera were determined to tie the knot.

Ever since the government banned social gatherings to combat the spread of the virus, many weddings have been postponed but these two decided otherwise.

They had sent invitations to guests but the instructions were clear, none of them would be allowed into the church but they would follow the proceedings live on Facebook.

On Monday, April 13, 2020, the two lovebirds, together with their parents made their way to ACK St Andrew’s Cathedral, Thika, where the wedding was to take place.

Donning facemasks and keeping social distance, the two were joined in the presence of a member of the clergy but there was no kissing of the bride.

Asked why he did not postpone the ceremony, Mureithi said it is not wise to postpone a covenant and his wife echoed his sentiments saying it is divine.

“The most important thing for me was to get a wife. As much there were no guests, I am sure that I have the support of family and friends.

“Our friends started sending gifts as soon as they realized they would not make it,” said Mureithi.

Friends and family in Kirinyaga County were glued to their gadgets as they followed the proceedings, saying they would have loved to attend but had to adhere to the rules issued by the Ministry of Health.

The wedding cost roughly Sh20,000 and the newlyweds only had lunch with their best couple in an in-house arrangement.

Covid-19 has killed 5 Kenyans in the US,hundreds stuck in other countries