VIDEO: How Kenyans are now sneaking into Nairobi-‘Panya’ routes. 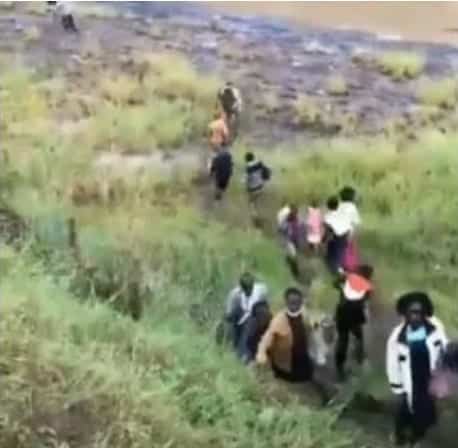 Hours after President Uhuru Kenyatta declared the cessation of movement in and out of Nairobi, Kilifi, Kwale and Mombasa counties for 21 days some Kenyans have found a way to get in and out of the capital city.

The government has placed roadblocks on the outskirts of the city where the order bars entry and exits in Nairobi.

On Tuesday morning, some Kenyans were filmed near one of the blocked roads at Kamulu, Kangundo Road taking ‘panya’ routes (shortcuts) to sneak in the city.

One of those sneaking can be heard telling others that the government let coronavirus in the country when they allowed a Chinese airplane to land and that no matter what they will find their way to the city.

“We are the ones suffering as you enjoy the privileges of power, nothing will stop us, you can block the road but we will find our way because we do not have coronavirus,” another one says.

This is the extent to which Kenyans are going so that they can access the counties which are in containment.
It is completely impossible for the government to enforce the Containment order 100%.pic.twitter.com/nyXu2J3Yxo #WeShallOvercome

Nairobi was put under cessation as it leads the country with the most affected by cases of Covid-19.

“The cessation of movement within the Nairobi metropolitan area shall be for an initial containment period of 21 days with effect from 7pm,” said President Kenyatta.

The roadblocks will cordon off the Nairobi Metropolitan, which has been designated as Nairobi City County, part of Kiambu County up to Chania River Bridge (Thika), including Rironi, Ndenderu, Kiambu town; part of Machakos County up to Athi River, including Katani; part of Kajiado County including Kitengela, Kiserian, Ongata Rongai and Ngong town; and all other areas as set out in the Order.

According to the president, only the movement of food supplies and other cargo will continue as normal during the declared containment period through road, railway and air.

Kenya already has a dusk-to-dawn curfew to contain the virus that has infected 158 people in the country, according to the government’s latest tally. Four people have died in Kenya from the disease.