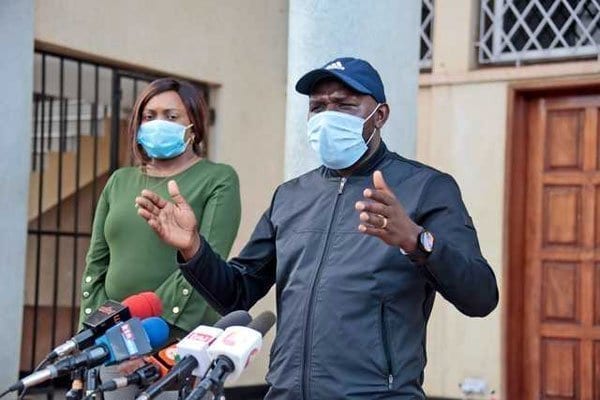 Voters in Central Kenya seem to differ with their leaders on the fate of Deputy President William Ruto, whose political fortunes have lately dwindled following a falling-out with President Uhuru Kenyatta.

Even as a number of leaders from the region supported the ouster of Elgeyo-Marakwet Senator Kipchumba Murkomen as Leader of Majority in the Senate and Majority Chief Whip Susan Kihika, residents of various parts of Central Kenya have castigated President Kenyatta over what they term betrayal of his deputy.

Mr Joseph Ngolania, a Murang’a resident, told the Saturday Nation that the President might have been misguided by “a few people who wanted to see him destroy his own house and boot friends who have been with him through thick and thin”.

He said the change of leadership in the Senate was uncalled-for and blamed ODM leader Raila Odinga for the wrangles that have rocked Jubilee party.

Mr Ngolania wondered why everyone was ganging up against the deputy president.

Mr Kelvin Mburu, a businessman, said he was not happy with the Jubilee fights, noting that this is not the right time since the country is fighting the Covid-19 pandemic.

“Jubilee is in the ICU and will not be around by next year, going by the happenings. I believe the changes will not affect Ruto’s chances in 2022. I would suggest that the deputy president look for another party and use it for his bid,” Mr Mburu said.

But Alex Mbote, another Murang’a resident, welcomed the changes, saying they are overdue, adding that respect for the President was paramount.

He asked the President not to waste any more time and clear “them” all, even in the National Assembly.

In Kirinyaga, a cross-section of the residents opposed the ouster of Mr Murkomen and Ms Kihika, warning that the President’s move could destroy the Jubilee Party.

They accused him of trying to weaken the Deputy President to ensure he does not succeed him in 2022 and vowed to back Dr Ruto.

“It is Ruto who is being fought, but we shall continue supporting him,” said Alfred Njeru.

Mr Jackson Mwiti, a Meru resident, said the gentleman’s agreement between President Kenyatta and Dr Ruto for each to rule for 10 years still stands.

He said they would support Dr Ruto despite the President’s efforts to frustrate him.

“We know what is happening because Kenyatta has teamed up with Raila and Gideon (Moi) to frustrate Ruto. We will not allow this to happen. Let them go on with their deals up there, but we know the man to vote for in 2022,” said Mr Mwiti.

In Nyeri, some residents said the changes in Jubilee were a plot to sideline Dr Ruto. Mr James Kimaru said that they will continue supporting the Deputy President.

“The Deputy President is being fought from within using these changes in Jubilee. But we will stand by him because he supported the President when he needed him,” he said.

Meanwhile, some people chose to remain neutral on the matter as they feel the future is unpredictable for the ruling party.

However, the leaders are divided along Tangatanga and Kieleweke factions. While some leaders have supported the move, others feel that removing Mr Murkomen and Ms Kihika was unfair, with Meru Senator Mithika Linturi terming the agreement between Jubilee and Kanu “illegal” and “dictatorial” because the relevant party organs were not involved.

Some showed no sympathy for the ousted leaders, saying they deserved to be moved because they had disrespected the President, adding that their removal was long overdue.

Nyeri Senator Ephraim Maina said Mr Murkomen and Ms Kihika failed to observe party rules and action had to be taken against them.

“Any party has its own rules and policies; the time has come to put Jubilee Party in order,” Mr Maina said.

“If a party has given direction and you feel you are too important to attend a meeting convened by the party leader, it is equivalent to being scornful. Besides, they were at liberty to leave and join the opposition,” Ms Chege said.

Gatanga MP Joseph Nduati also hit out at the expelled leaders, saying they brought the expulsion on themselves, and called on the President to continue cracking the whip even in the National Assembly.

But Maragua MP Mary Waithera called for leniency by President Kenyatta, saying his actions could affect the party.

She suggested that the President convene a party meeting to iron out the issues affecting Jubilee.

“They had been hurling insults at the President, who is the leader of the party, so they had to be thrown out,” she said while donating food to flood victims in Kamuthanga village, Ndia Constituency, on Wednesday.

“We fully support the President for the changes in the Senate and for entering into a coalition agreement with other parties,” she added.

She dismissed as propaganda claims that the President had betrayed his Deputy William Ruto.

For their part, leaders from the Rift Valley have accused President Kenyatta of reneging on his promise to support Dr Ruto’s presidential bid in 2022.

They said the increasing alienation of Dr Ruto clearly indicated that the President had abandoned him.

In Elgeyo Marakwet, assembly Deputy Speaker and Arror Ward Representative Christopher Chemsong said the President was steering the country into an electioneering mood at a time when it least needs it.

“The President has started 2022 politics and it is unfortunate that the people of Elgeyo-Marakwet have become the first casualties. It is clear that the President doesn’t want the Deputy President to succeed him anymore,” Mr Chemsong said.

He asked the President to spare wananchi in his war with the DP. “If you have an issue with your neighbour and you want to settle it, you don’t make his children the casualties; you take the battle to him in person,” he said.

The leaders said by replacing Mr Murkomen with Samuel Poghisio, the President played them against their Pokot neighbours after years of conflict between the two communities.

The DP’s support base was taken aback by President Kenyatta’s move to clip the DP’s wings and crafting deals with other parties to counter a backlash from the Ruto camp.

And now, with the signing of a coalition deal between Jubilee and Kanu and an upcoming one with the former Council of Governors chairman Isaac Ruto of the Chama Cha Mashinani party, Dr Ruto’s political fortunes continue to dwindle.

On Wednesday, the CCM leader flew from his Chepalungu home to State House, Nairobi, where he agreed with Mr Kenyatta and the Jubilee leadership to enter into a post-election pact.

Mr Kiprotich Samoei, Isaac Ruto’s aide, told the Saturday Nation that the finer details of the agreement are being discussed and would be cemented and signed any time next week.

Former Kipkelion MP Parliament Magerer Langat said the purge by Mr Kenyatta of Ruto’s men was long overdue, saying Ms Kihika and Murkomen had “grown horns” and disrespected the President and the will of people.

“The President needs people who will respect and support him achieve his legacy. William (Ruto) forgot his mandate and instead started politicking. The President took too long to crack the whip,” Mr Magerer said.

In Baringo, the political coalition between the ruling Jubilee and the independence party has elicited mixed reactions among sections allied to the two parties in the county.

A section of MCAs allied to Jubilee Party termed the deal a non-issue, saying that Kanu was in coalition with the ruling party since 2017, anyway.

Led by nominated MCA Francis Kibai, they said that the merger has given the independence party a lifeline.

He, however, said that they welcome them on condition that they respect their choice of 2022 presidential candidate — Dr William Ruto.

“They should not come and dictate what they want because we have made an ultimate decision that our presidential candidate come 2022 is Ruto, which is not negotiable,” said Mr Kibai.

Bartabwa Ward Rep Reuben Chepsongol said President Uhuru Kenyatta has the mandate to decide who to work with, but should ensure that he unites all communities.

VIDEO: Kenyans react to Uhuru’s action to fight Ruto at this time